In Matthew 7:24-27 Jesus talks about wise and foolish builders.  He differentiates between them based on how they set their foundations during the construction process.  The wise invested his time, energy and resources on the foundation, digging deep through the sandy surface until he reached the rocky layer beneath.  Once he had located the solid surface, he set the foundation footings right onto the rock.

ASAP Ministries and the local mission leaders believe that in order to build a strong foundation for the work in Laos, we need to establish a school where we can educate and train young people early in life. For this reason, we have joined our efforts to start the first Adventist school in Laos —Living Water Academy. 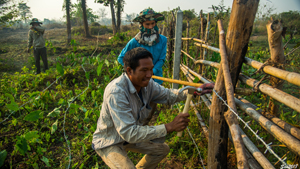 Several years ago, the idea of having an Adventist Academy in Laos was just a dream, but today it is becoming a reality. The first phase of the project began in March.  After the workers’ training in Vientiane came to a close, twelve ASAP church planters along with four other volunteers spent the next few days helping with the construction of the caretaker home, the bathhouse, and a fence that runs along the south side of the property. After three days of hard labor, the fence was completed and foundations were laid for the caretaker home and the bathhouse, leaving the rest of the construction work to be continued by local builders and volunteers. 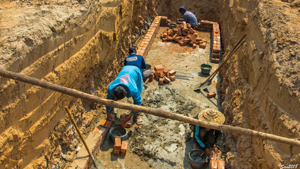 I was blessed to be part of the team of volunteers during this groundbreaking event.  We started each day with morning worship and finished with a time of sharing and prayers.  It was a bonding experience for us.  New friendships were started and old ones strengthened.  It was a delight to witness how our volunteers are catching the vision. They understood that they were part of something very important.  By investing in this land, they were investing in the future of their descendants.  They labored joyfully in spite of intense summer heat because they knew that they were building a stronger foundation for the gospel work in their homeland, and making a difference for eternity.