Immigrants from Countries of Persecution

From North Korea
Since 1953 100,000-300,000 people have defected and fled from North Korea. Most went to China or Russia, but about 27,000 went to South Korea. The United States has received only about 170 North Korean refugees by 2014. Canada at present is not as open to receiving them as it used to be.

Somalia
In America there are 80,000 Somali that are considered 100% Muslim with the largest group outside of Somalia being in Minneapolis, Minnesota, and many in Columbus, Ohio, Seattle, Washington, and Lewiston-Portland, Maine. Beyond that are 50,000 more Somali Bantu from both Somalia and Kenya with the largest groups in Salt Lake City, Utah, Denver, Colorado, San Antonio, Texas, Tucson, Arizona, Manchester, New Hampshire, Burlington, Vermont, Columbus, Ohio, Minneapolis-St. Paul, Minnesota, Atlanta, Georgia, San Diego, California, Boston, Massachusetts, Pittsburgh, Pennsylvania, and Seattle, Washington. There are 37,000 Somali in Toronto, Ottawa, Calgary, Edmonton, Vancouver, Winnipeg, and Hamilton, Canada.

From Afghanistan
15,361 Central Kurds with the largest group in Nashville, Tennessee, 43,312 Uzbek with the largest groups in the Brooklyn and Queens area of New York City and Fair Lawn in Bergen County, New Jersey, 71,000 Tajik, 5,800 Hindu Sindhi. Freemont, California has the highest number of Afghanis outside of Afghanistan. There are very few Afghani Christians. 50,000 Northern Pashtun are from both Pakistan and Afghanistan. Reportedly 100% are Muslims. Canada has 44,000 primarily in the Greater Toronto area, Montreal, and Vancouver as well as 12,000 Tajik in British Columbia, Quebec, Ontario, and Alberta, plus 2,800 Northern Uzbek.

From Iran
336,000 Persians who are 76% Muslim with the largest groups in Los Angeles, Beverly Hills, and Irvine, California, as well as New York, New Jersey, Washington D.C., Maryland, Virginia, and Texas. 51,000 Northern Kurds from Iran and turkey, 100% Muslim with the largest group in Nashville, Tennessee. Canada records 7,000 Parsee living in the Greater Toronto area, Montreal, Vancouver, and beyond.

From Pakistan
In the United States there are 293,000 Urdu who are stated to be 100% Muslim. Total population from Pakistani background is more like 360,000, making it the 12th highest country for immigration. New York, New Jersey, California, and Illinois have the largest amounts. There may be 250,000 in Canada from Pakistani background with the largest amount in Toronto, Ontario. There is a great diversity in backgrounds among them, including the Punjabi, Muhajirs, Kashmiri, Pashtuns, and Sindhi with Muslims, Hindus and Sikh religious backgrounds.

From Eritrea
There are approximately 26,000 living in America from Eritrea, the youngest of countries in the continent of Africa. It is hard to know their exact numbers since they used to be part of Ethiopia. There are many in Washington D.C., Los Angeles, San Francisco, as well as in Seattle ,Washington, Columbus, Ohio, Minneapolis, Minnesota, Chicago, Illinois, New York, Atlanta, Georgia, Houston and Dallas, Texas, and Denver, Colorado. There are many Muslims and Christians among them.

From Nigeria
Shuwa and Baggara Arabs from both Sudan and Nigeria, all of which are between 95 and 100% Muslim and the same percentage among 12,000 Adamawa Fulani from Nigeria, Chad, and Cameroon 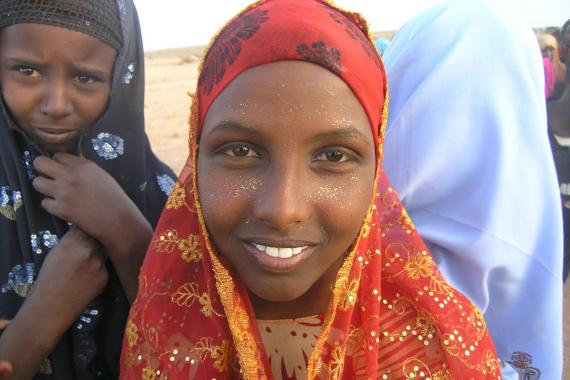