Home Explore Cambodia
The hard –working and optimistic people of Cambodia are rising above the dark history of genocide and poverty. The capital city of Phnom Penh bustles with activity while the countryside remains much as it has for centuries. Many people have been turning to God for answers. ASAP-sponsored teachers, medical missionaries, and church planters, are showing love and sharing truth beautifully.

The wide Mekong River glides gently through most of Cambodia where it sits between Thailand and Vietnam in Southeast Asia. During the rainy season the waters rise so high that they actually reverse the flow of another river and swells it to four or five times its normal size. The enormous amount of water is home to many fish that help the poor survive. As the waters recede villagers can sometimes even pick fish off the forest that was covered. There are even rare freshwater dolphins enjoying this lake.

In the south Cambodia’s jungles give way to a beautiful shoreline on the Gulf of Thailand with tropical islands dotting the view. Foreigners and locals have started flocking to enjoy the water and the sand, but much is still undeveloped and relaxing.

Cambodia is most famous for Angkor Wat and the expansive complex of temples that surrounds it. They say it is the largest temple complex in the world with even more stones than in the pyramids and carved at that. It was built in the 1100s at the height of the Khmer Angkor kingdom first as a Hindu temple and later converted to a Buddhist one.

There are still many fairly unexplored places in Cambodia with some rare tropical diversity in the jungles of Mondulkuri and Ratanakiri. On the opposite end Phnom Penh the capital city is booming with 1 out of 4 Cambodians living in it.

The Cambodian people have an amazing tenacity and optimism, having overcome one of the worst wars in recent history. Many have determinedly learned English or found other ways to improve their living situations in the last twenty years. Foreigners find ready smiles wherever they go.

Perhaps those smiles rise out of the continued enjoyment of greater freedom and safety that have come in the last twenty years. There is definitely a growing sense of hope and confidence for the future.

Almost anyone who is over forty-years old has a sad story to tell and some scars from the genocide of the 1970s.  Many saw their family and friends killed in front of them while they suffered starvation and terrible work conditions under the communist regime. This time of betrayal and murder left hurts that still need to be healed.

The countryside has much poverty. Many live on less than a dollar a day. Villagers in dusty shacks survive on white rice and pepper paste during the dry season. Children stunted by malnutrition struggle to study in school. Many cannot afford the extra tutoring usually necessary to pass the tests in the “free” government schools.

Significant improvement has been made in the amount of deaths for mothers during childbirth and children under the age of five. Life expectancy actually increased by 12 years during the last decade with less dying from malaria, tuberculosis, and HIV.  Medical care and life has especially improved in the cities, but much more is needed in the countryside.

There are an amazing amount of children with 1 out of every 3 Cambodians under the age of 15. Illiteracy is still high with about 1 in 4 unable to read and write. Too many children die from acute respiratory diseases, diarrhea, malaria, and many factors related to not enough healthy food.

On the other hand, cardiovascular diseases and diabetes are rising significantly leading to premature deaths among both men and women. 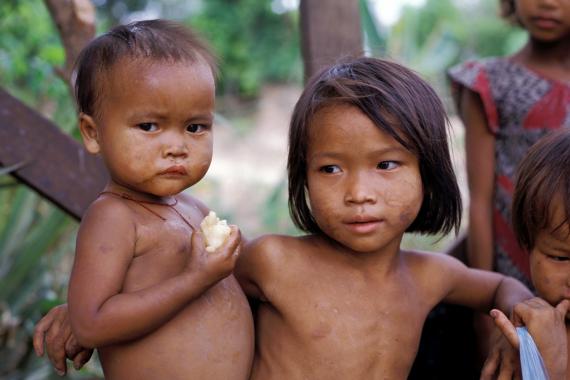 Buddhism is the national religion, but religious freedom is allowed. About 85% percent of Cambodians consider themselves Buddhists. Partly because of the pain of the war years many Cambodians began to look elsewhere for answers about the incredible suffering they had experienced and how to escape it. Huge numbers became Christians until now about 3% of the country profess to be followers of Jesus.

Most of the country is Khmer but there are about 29 fairly unreached tribes. Belief in spirits and ghosts is widespread with various ceremonies used to seek help or freedom. Many feel completely hopeless in the face of death, unable to afford paying for the Buddhist or animist ceremonies that are supposed to help them. They need the hope of eternal life along with practical compassion for their daily struggle to survive. In the last 25 years the Seventh-day Adventist church has grown to include about 6150 members. Learn more about the unreached peoples of Cambodia from Joshua Project.

Pray for the needs that you have read about above. Ask God to “turn them from darkness to light, and from the power of Satan to God, that they may receive forgiveness of sins and an inheritance among those who are sanctified by faith in Me” (Acts 26:18).

Pray for the ASAP-sponsored church planters, medical missionaries, literacy and feed and read school teachers to effectively communicate God’s love and truth to a people in such great need. Pray for other mission workers and ADRA workers to rapidly spread the gospel and for the new members to be adequately disciple and empowered to be witnesses as well..

Print prayer cards for the unreached in Cambodia to use in your prayer time, family worships, or small groups.

“And God will wipe away every tear from their eyes; there shall be no more death, nor sorrow, nor crying” (Revelation 21:4).