Have you worked out spiritually lately? The Lord encourages us to carry each other’s burdens, and in this way we fulfill the law of Christ (Gal. 6:2). I hope that your spiritual muscles are strong enough to handle the heavy burden that I am asking you to help carry for our brothers and sisters in Myanmar (Burma). You have most likely heard about the coup there that started on February 1 when Myanmar’s military seized power after detaining Aung San Suu Kyi and other democratically elected leaders. As I write this, the country remains in chaos, and innocent people are suffering daily in a multitude of ways, including losing their lives in pursuit of freedom and peace.

This is not just another news blip to us at ASAP Ministries. It is personal. Take, for example, ASAP’s Field Relations Coordinator, Pr. Benjamin Kip. He writes:

I jolted out of bed at 2 a.m. in the morning. My sister’s voice whispered on the phone, “Ben, they are on the roof! What should I do?”

“Who is on the roof?” I asked as my heart beat wildly.

“I don’t know, but they are yelling and shining a flashlight back and forth in the windows to see if anyone is moving inside. I’m so scared.”

As a brother, though thousands of miles away, I went right into action. “Go find mom and stay with her and just quietly pray and listen. I’ll stay on the phone with you.”

For the next two hours, I claimed Bible verses and prayed with my dear mother and sister to help calm their hearts. Thankfully, God heard our prayers and the men did not make it into the house that night. Later, I read in the news that the military released 23,000 criminals with payment and instructions to go wreak havoc in the towns and villages. These criminals have been looting, setting homes on fire, killing randomly, and ultimately terrifying innocent people. How can I sleep at night, knowing my mother and sister are in this state of uncertainty? What I decided to do is start a daily live prayer session on Facebook and Zoom. I’m joining our refugee leaders and believers from around the world. I believe Heaven’s General will send forth thousands of army angels to help my people. Also, the ASAP staff are praying daily for my people. It really touches my heart to hear them pray with so much fervency. Please join us! My people need your prayers.

Pr. Jonathan,* president of a Seventh-day Adventist Mission in Myanmar, also implores us to pray for his country. He recently wrote, “The situation in my country is getting worse and is very unpredictable. People feel like they are holding the tiger’s tail. If they don’t kill the tiger, the tiger will kill them. There’s no choice, do or die! This is the reality people in Myanmar face today.” He went on to describe how hard it is to function with the banks closed, food prices skyrocketing, internet shut down for long periods of time, travel forbidden, schools and churches closed, etc.

Dr. Lin,* one of ASAP’s field supervisors, posted on Facebook a sympathetic invitation for anyone needing medical care to contact her. The hospitals and other institutions have closed because the medical professionals are on strike. This is a great opportunity for her and the ASAP medical missionaries she supervises to be God’s hands and feet to help those in need. Pray for safety and courage for them as they care for those God sends them.

On Monday, February 22, U.N. Secretary General Antonio Guterres spoke out against what is happening in Myanmar. “We see the undermining of democracy, the use of brutal force, arbitrary arrests, repression in all its manifestations. Restrictions of civic space. Attacks on civil society. Today, I call on the Myanmar military to stop the repression immediately. Release the prisoners. End the violence. Respect human rights, and the will of the people expressed in recent elections.” [1]

This horrific activity is not new in Myanmar. Ethnic and religious minority groups have been mistreated for the past 70 years. Just this past January, on the border between Myanmar and Thailand, 4,000 Karen had to grab what few essentials they could carry and flee deeper into the forest for safety from the military strikes targeting their villages. Even more recently, another 2,000 Karen had to flee. Among them were twelve Adventist families from two small church groups and the families from an ASAP-supported school. They plan to continue studying under the trees. We received a precious video of students singing and praising the Lord on Sabbath despite the sound of bombs exploding in the distance. I think as they keep their minds on God’s promises, their hearts resonate with John 16:33. “These things I have spoken to you, that in Me you may have peace. In the world you will have tribulation; but be of good cheer, I have overcome the world.”

Now, more than ever before, the 54 million people in Myanmar need your prayers. They are suffering injustice and many have yet to hear the Good News of salvation. 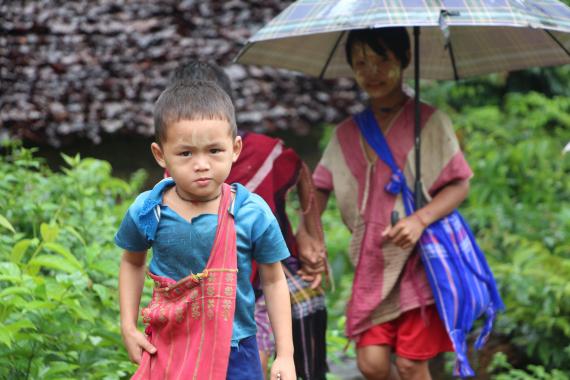