“You’re sleeping in your car?” I couldn’t believe it. Phaly, his wife, Kak, and son, Chris, had no water or heat in their house, and it was super cold. Soon we learned that around four million Texans were facing the same, ill prepared for eight days of freezing weather.

“You can stay at Jose’s house,” I told Phaly. “Lynetta’s already there. You have a church family now, you know.” Phaly, from Laos, and Lynetta, from Cambodia, were just baptized on January 9, 2021. For three and a half years, volunteers with Reach the World Next Door have been helping rebuild the community in Rosharon after Hurricane Harvey. Phaly and Lynetta are the first fruits of those caring actions. Phaly became interested in learning about God by seeing wave after wave of Christians help his community. Two volunteers regularly helped Lynetta with her health challenges. Eventually, several of us had the privilege of spending many hours telling Bible stories and sharing the three angels’ messages with both of them.

“We’re okay,” said Phaly. He’s been through worse things. About 12 years ago, when he felt his life was at risk, he fled Laos. Two daughters had to be left with grandmothers. Since then he’s eked out a living, growing water spinach in a couple of greenhouses. I’ve never heard him complain, so it didn’t surprise me that he was making do.

“The pipes under our mobile home are all busted,” Phaly added. “I can’t find any plumbing supplies at Home Depot.” We began contacting other friends in Rosharon. Nobody had power, and everyone had broken pipes. That’s why the shelves were empty.

As the cold continued, we wondered if we would be able to meet on Sabbath since our small group worships in an unfinished, though nice looking shed on Lynetta’s property. Jose, the member who now leads this church plant, told us to come with heaters and coats. After lunch we got ready to go out with a stack of blankets to see how the neighbors were doing. We had prepared a card with QR codes of MyLanguageMyLife.com in English, Spanish, Cambodian, and Laotian. On the back side was an invitation to attend Wednesday Bible studies at Phaly’s house and church at Lynetta’s. I smiled to think how similar this was to the description of the early churches, in the book of Acts, meeting in members’ homes.

Phaly didn’t think he could go out with us. His water still wasn’t running and his wife was eager for him to finish. Kak comes from a strong Buddhist background and is studying the Bible, also preparing to be baptized. One of the church members quickly pitched in to help Phaly while the rest of us headed out.

An hour later we were back together. The report focused mostly on Lynetta, as she described an elderly couple who still had no water and desperately needed help. Where could we find supplies?

We put out the word to our local church. Over the next two days the exact parts needed came together. On Wednesday, I joined Phaly and two others under the couple’s house. Before dark they were wearing big smiles as the water flowed freely in their little house.

I think my smile was even bigger. I was thrilled to see Phaly and Lynetta serving their own community. As we gathered for our Bible study, we laid a plan for them to practice telling the Bible stories each Wednesday night and Sabbath morning. No longer will they be just students. Though brand new members, they are becoming missionaries.

And who knows where God will take them. The week of his baptism, Phaly said, “I have to go back to visit Laos. There are so many people who need to hear the good news.”

You, too, can be part of sharing the gospel across cultures. Open your friendship circle to those in your area from other backgrounds who need to be included in the family of God. Visit adventistlearningcommunity.com/courses/rwnd to learn how to facilitate a small outreach group like the one that has impacted Rosharon. 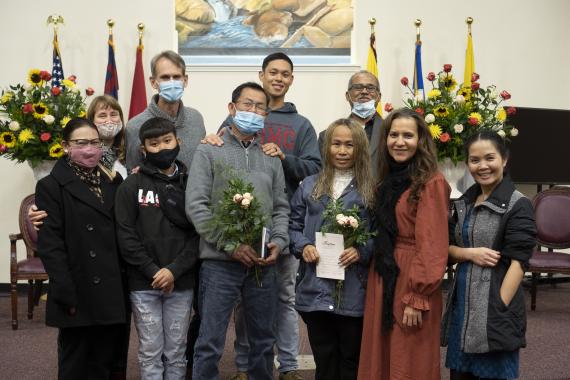