God Always Has a Plan

Saeng (pronounced “sang” as in “sang a song”) looked around his new big classroom in California, eyes wide with fear. His head pounded as he listened to the students and the teacher chatting around him, not understanding a word!  This brave eleven-year-old boy in the fourth grade had just arrived from a refugee camp from Thailand. Words such as DIFFICULT, FRUSTRATING, BEWILDERING, FEARFUL, and NEW, could be used to describe those first couple years in America, but they fall terribly short in adequately summing up the experience.

When Saeng turned thirteen, Ko Saelee, a Hmong-Thai pastor moved into the refugee apartment complex he lived in. Later on, Ko married Terri West, who joined him in ministry. Saeng immediately noticed something different about these energetic young people. They smiled, warmly welcomed him into their home, and asked, “Do you want to study and learn more English after school in our tutoring center?” On Friday evenings, Saeng observed a different program.  They used the Bible as their textbook and sang songs about Jesus. Because of the genuine LOVE Saeng experienced from them, he kept coming. They even picked him up from his home to come to church when he moved to a different part of the city.  For the first time in his life, he came in touch with a love that reached down to the depths of his heart, a love that started to heal the trauma that comes from fleeing his country and living as a refugee, a love from his new friend Jesus.

One day, Saeng pulled Pastor Ko aside and said, “I think God wants me to be a pastor like you!” Saeng felt a clear call and urgent burden to share Jesus with the thousands of Laotian Buddhists around him (at that time, there were no Laotian Seventh-day Adventist pastors serving in the United States). Pastor Ko took him seriously and prepared Saeng for Bible studies. Saeng’s baptism was the happiest day of his life!

God did have a plan for Saeng. After his baptism, the Lord helped the Saelees find a sponsor to send Saeng to Weimar Academy. His new faith blossomed in the rich spiritual environment of the school. On graduation day, he smiled outwardly, but a war raged in his mind. God’s call to become a pastor remained crystal clear over the four years at Weimar. He wanted more than ever to return to that beautiful place and continue working toward his dream, but he also knew that was against his parents’ will. They strongly urged him, “Study medicine or law, Saeng. You need to make a decent living. We are counting on you to provide for us! How could you even consider not accepting the scholarships offered you? It’s crazy to go back to that Christian school where you are indebted to people!” He wanted to honor his parents, but could not bear to think of disappointing his Heavenly Father.

The day came. With fortitude, he approached his parents with the news that he decided to continue studying to be a pastor at Weimar College. After several attempts of persuading him to change his course and even threatening him, they disowned him. His mom’s words, “I regret the day of your birth. Leave now and never come back! I am no longer your mother,” cut Saeng’s heart like a knife. Saeng sadly left home, understanding he may never get to see his parents again. Saeng packed his bags quickly, and before he left, he felt impressed to go back to thank his mother for all that she did as his mother for the past eighteen years. It was at that moment that she threw her arms around him with such feeling and began to convulse and vomit. Saeng noticed her medicine bottles spread across the bed and he remembered a few days earlier, she said, “I would rather die than live to see you bringing shame to the family.” He rushed to the hospital and saved her life where she was kept for a week. The family forbid him to see her. However, he prayed each day for them. God worked hard on his parents’ hearts. He made many attempts to contact them. In about three months, his mom and dad accepted him back. She said, “Saeng, you can come home. We miss you.” Saeng knew that God worked a miracle, answering his prayers, softening his parents’ to him and his God. He longed for the day they would turn from Buddhism to Christianity. He knew that day would come, and eventually it did! His mom, dad, and sister all got baptized in the same baptismal tank that he gave his life to Jesus in ten years before!

Saeng made solid Christian friends through school and found his beautiful, mission-minded wife, Mileicy, there. On the weekends, he spent time church planting among the Lao people in a city one and a half hours away. God was working out His perfect ministry plan in Saeng’s life. The Lord called Saeng to the Andrews University theological seminary. He spent his weekends church planting for the Laotians in Holland, Michigan, working among his people. After the seminary, he returned to California to serve the Lao people but because of lack of funding, he decided to move back to Michigan and continue church planting in Holland as a “tent-maker”. The Lord worked through Pastor Saeng’s leadership and others to grow a thriving Seventh-day Adventist Lao ministry called Lao Adventist Mission Projects, which includes DVD evangelism, the first digital Lao Old Testament Bible, and a growing church group of over sixty.

Pastor Saeng recently accepted God’s call to serve as ASAP’s Associate Director. With his background in church planting and love for missions and spreading the Gospel, we think he is just the one God chose. Please pray for him as he transitions to full-time ministry and for his precious family, his wife, Mileicy, children, Danien (8), Milen (6), and Beya (4). 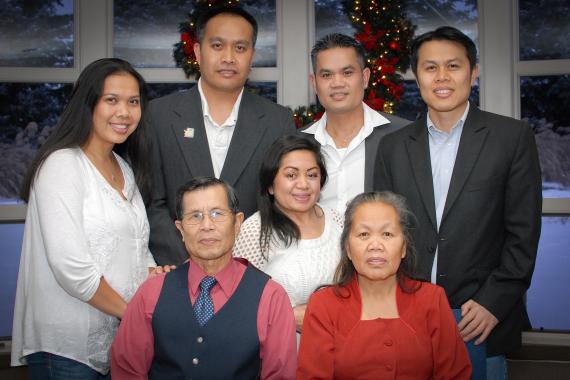