From the Headlines to Your Hometown

Home Explore Media Archives Stories From the Headlines to Your Hometown

BY SCOTT GRISWOLD AND LYNN EDMUND

A month ago, I knocked on the door of a good friend in the Afghani community. Five men sitting on the floor had just finished their curry and bread. “Come in, come in,” they welcomed me. I looked around the circle. Their faces were unusually sober.

“My brother-in-law was just killed yesterday,” a man shoved his phone at me. I looked at the handsome pilot. “He had just been home for vacation,” he continued. “The Taliban killed him!”

The whole group was extremely worried. The Taliban was taking over new provinces. Any of their family members were at risk just because their sons had worked with the U.S. military. “I don’t think we’ll ever be able to go back,” my friend said sadly.

Now the whole country has fallen under the Taliban’s control. We spent a late night desperately trying to get visas and tickets for a brother and uncle of our closest Afghani friends. The U.S. military is keeping the airport open for only a little longer. When we woke up, we discovered that the visas had arrived by email, and we praised the Lord. Then, a few minutes later, a report on the news made us unsure if the tickets to India would be any good. We’re praying and waiting.

Now, more than ever, I know that the 80 million people displaced by war and persecution are not just numbers, but real people with hopes and fears and family members who long for someone to help them.

Will you join us in responding? Lynn Edmund has. Read her story in her own words, and see what you can learn about how to get involved.

I love helping the homeless, but I had never thought much about refugees. Then I met Pastor Scott and Julie Griswold with Reach the World Next Door. Jesus said “Go!” but now I know I can “go” without leaving Houston, because He has brought the need to my own city.

I gathered a few friends online and started the Reach the World Next Door training program with them. The videos and discussions motivated me to volunteer at a local refugee resettlement agency. They interviewed me and put me right to work. My job is to set up apartments for refugees arriving from Afghanistan. I load my van with supplies from the agency and fix up their apartments before they fly in.

I was so excited to greet the first family. So was their husband and father! He’s been working here for a while and preparing so his wife and six children could join him. They were so happy and a bit overwhelmed.

We took the mother and the kids to the local school and filled out their forms. It was an amazing experience. I’d never thought before of what it must be like for them, learning English from scratch, making new friends, and figuring out life in their new country!

On Sabbath morning, I had to call Pastor Scott and tell him I couldn’t lead the training this week because I had promised to take the kids to the park. He laughed and said, “That’s what it’s all about!” They played so hard. I was very exhausted, but the kids were so happy. I think that’s what’s been so special for me, seeing how well-behaved the kids are and how the happiness just flows out of them.

I got to sit on the floor in their home and eat their wonderful food with them. We couldn’t communicate much. Then I found an interpreter. I learned all about their experience back in Afghanistan. They’ve also shared the challenges they’re facing here.

Just last night, the father called me for help. That shows me he’s truly trusting us. I’m so glad we can help lighten their load and share God’s love with them.

I’m so glad for Lynn and others like her. Would you like to help Afghani refugees? Canada has promised to resettle 20,000 more refugees from Afghanistan. America has plans for up to 30,000. Please visit reachtheworldnextdoor.com/training/online and start the training with some friends. Call a refugee resettlement agency. Pray for the refugees. Love them like your own family. 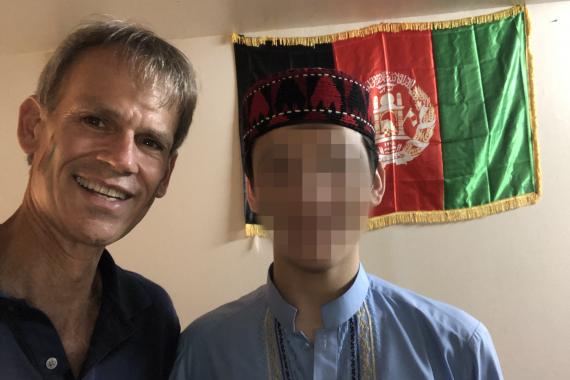