The following article was adapted Elder Dean Coridan’s sermon at the ASAP Missions Alive! program on Sabbath, November 4, 2017, at the Village Seventh–day Adventist Church in Berrien Springs, Michigan.  Elder Coridan is the President of the Iowa–Missouri Conference and the Board Chair for ASAP Ministries.

Often you hear three words used interchangeably: immigrants, undocumented immigrants, and refugees. Please separate them. Immigrants are here by choice; refugees are not. Refugees have lost everything, had their homes taken away, witnessed family members killed, fled their countries and lived in camps, sometimes for many years.

There are more displaced people on planet Earth today than there ever have been in the history of humanity. If anybody should have a heart for refugees, it should be Seventh-day Adventists because of our theological foundation.  Isaiah 58 should be a primary focus of believers in these last days.  It starts: “Cry aloud, spare not; Lift up your voice like a trumpet; Tell My people their transgression, and the house of Jacob their sins. Yet they seek Me daily and delight to know My ways. As a nation that did righteousness, and did not forsake the ordinance of their God. They ask of Me the ordinances of justice; They take delight in approaching God” (vv. 1–2 ).

This passage speaks of people who pled for God’s presence and sought Him when they were in church, but during the week they were enslaving people, gossiping, fighting, and engaging in strife and debate that divided them. They even fasted and prayed for the purpose of winning arguments!  I suggest that religion today is not far off from religion back then.

Verses five through seven state, “Is it a fast that I have chosen, a day for a man to afflict his soul? Is it to bow down his head like a bulrush, and to spread out sackcloth and ashes? Would you call this a fast, and an acceptable day to the Lord? Is this not the fast that I have chosen: to loose the bonds of wickedness, to undo the heavy burdens, to let the oppressed go free, and that you break every yoke? Is it not to share your bread with the hungry and that you bring to your house the poor who are cast out?” Verse eight starts with the word THEN. God says to do this, THEN your light will break forth like the morning. THEN you shall call out and I will hear your voice.

There is a key difference between verses ten and seven where it talks about extending your soul to the hungry. Verse seven could look like dropping off cans at a food bank. I’m not degrading that. But God wants us to go a little deeper when He says extend your SOUL, everything you are, to the hungry. Ministry that pleases God cannot be done from a distance. I should not disassociate myself from the war weary, the suffering, the refugees, and live a separate life from them, throwing something their way from time to time. Ministry that pleases God includes my personal involvement, trying to help somebody in a tangible way. Donations can never take the place of your personal touch to a hurting person.

When I first heard about refugee ministries, I wondered, “Do I have refugees near me?” I discovered there were many in my area, like a group of Chin refugees from Myanmar. I found an interpreter and set out to locate them. I knocked on doors, sat in their homes, talked to them, got to know them. Gail and I took food and a bunch of stuff to them. I thought I knew the need but it amazed me how little I truly understood. The number one need of refugees is fellowship, connection. They are lonely.

Imagine being a refugee. You pack all you own into in a little bag, get on a plane, and arrive somewhere strange, left standing alone! Maybe someone picks you up, takes you to an apartment and says, “Here you are.” It would be nice if they showed you how to open the door, turn on the heat, work the appliances … loneliness! You have been cut off from everything familiar to you. In every home where we sat down and talked in that town, people cried. “You are the first person who ever came to visit us. Thank you!” Every Chin family I visited had an American flag and a map of the United States. They wanted to fit in. They want to be part of their new country, not ostracized. Take the initiative. Say, “I want to get to know you.” Refugees want to be treated like family. They will respond and you’ll never regret making lifetime friendships with them. 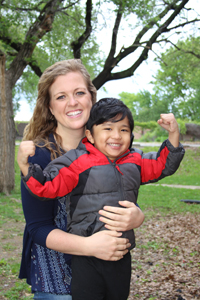 My daughter, Anna, spent a year in Nepal and learned to speak the language. When we learned that there were many Nepalese-speaking refugees in Kansas City, she moved into an apartment complex where they lived, to live among them. Most refugees from Nepal are Hindu. It’s tough evangelizing them in Nepal! But here in America, Anna has many opportunities to share.

Three teenage girls came to visit her. They wanted to know what her apartment looked like and what she eats. They picked up a Bible story book and turned to a picture of heaven. Staring, they asked, “What is that and where is it?” Anna said, “That’s heaven!” and went on describing it in detail and how Jesus is coming back to take His people there someday. Spellbound, all three looked up at her with wide eyes and asked, “Would He take us to heaven, too? Can we go?” Anna led them in their first prayer. “Jesus, when you come, will you take us to heaven? We want to go.”

Refugee children are vulnerable and at risk for sex trafficking and gangs. A fourteen-year-old Hindu young man often joins in the community service activities, meals, and youth fellowship Anna organizes. He has a hard life. One day he blurted out, “I can’t sleep at night! I see ghosts and they won’t let me alone.” She said, “If you pray to Jesus, they will go away.” He responded, “I’m not going to pray to Jesus; I’m Hindu, and I’m going to stay a Hindu!” About three weeks later Anna was getting ready to go to the Iowa–Missouri Conference camp meeting. All the kids asked, “Where are you going?”

“It’s where Christians get together and sing songs and play games. There’s lots of food and fun.”

Anna called me. “There are a few Hindus that want to experience campmeeting. Can they come?” They came and observed everything. At the end of campmeeting this young man came to Anna and said, “Last night I prayed to Jesus and they are all gone! I can sleep at night.” He is now a Jesus follower. Throughout that apartment complex he walks around and sings the songs he learned at camp meeting. If he finds a person who is having a bad day, he says, “Let’s pray to Jesus.”

We decided to start Pathfinder clubs as church plants in our conference. The vast majority of our 47–member Nepalese Pathfinder club is Hindu. I explained to the community leaders what it was and how we can help their young people. They all agreed to it. Someday we are going to have a church there and the teenagers are going to operate it! The answer to church growth for the Seventh-day Adventist church is working with the underprivileged. That is where Jesus is. We can make a difference! 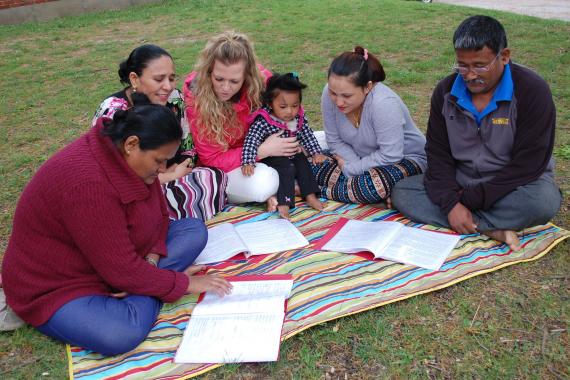