Recently, a small committed team from America and Canada partnered with the ASAP-sponsored Samraong Adventist School to represent Jesus to a Buddhist community. They chose to hold public evangelistic meetings, something many think does not work among Buddhists. The teachers at the school were thrilled by the response.

Mission trip participants joined local church members to invite people in the city and countryside. On the first night they watched eagerly to see who would come. More than 150 children quickly showed up, but the adults trickled in slowly. ASAP board member Curtis Letniak had run all over with the local pastor, trying to find enough chairs. Some thought they had gotten way too many, but one hour after the stated starting time, nearly every seat was filled and the meetings officially began.

Pastor Nhean Thon Sovan, the health superintendent for Cambodian Adventist Mission, shared health messages that were relevant to those attending, including many whom he counseled that very day in a mini health clinic. Church members led Khmer praise songs and children from the school sang special music. Pastor Scott Griswold, who served with his family in Cambodia for six years, preached the sermons. “It was such a privilege to be the speaker,” he said. “I loved watching God use simple Bible stories and testimonies of Cambodians experiencing God’s power, to touch lives.” Each night Pastor Scott invited the people to come forward with prayer requests. Almost everyone came.

Meanwhile teachers and mission trip team members busily worked with 150 children. Julie Griswold organized a program using the same Bible stories as the adult meetings, with lots of activities to keep the children occupied. With the adult meetings running long, this was challenging! Still, the children did not want to leave when the program ended.

The adults, however, were exhausted since earlier in the day they had led a three-hour vacation Bible school for the children but the positive response from the open hearts of the children was a rich reward.

Four large groups of children rotated through stations where the two Julies, Julie Griswold and Julie Letniak, worked with others to share Bible teachings, play games, help them make crafts, and teach basic health principles. The children loved the fact that the Griswold’s and Letniak’s children, Josiah, Jonathan, and Kaitlyn, were very involved too.

When the meetings ended, the teachers were most excited by the fact that many of the students’ Buddhists parents and neighbors had attended. In these meetings, they had clearly seen that God cares about their whole lives, their family problems, their financial challenges, their health, and their eternal life. The love shown before the meetings had drawn many to attend. True compassion and helpfulness carried the message during the meetings. It will take ongoing love to secure these new interests in a solid relationship with God. Each part is important, and love is what made the difference. 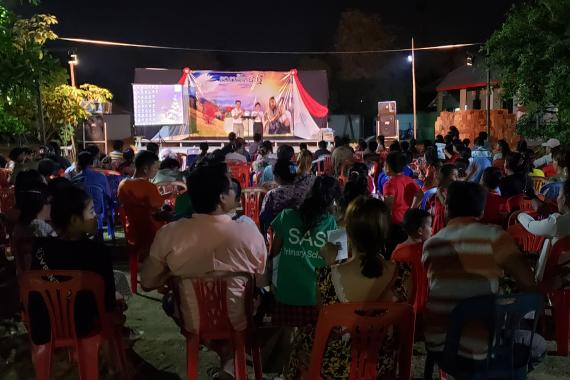