A Ministry Powered by Prayer

The sound of gunfire rang through the peaceful demonstration in Yangon, Myanmar, as police opened fire on the unarmed crowd. During the ensuing chaos, a Seventh-day Adventist church member was shot. A friend was trying to stop the bleeding when police arrested the wounded man and dragged him away. Sadly these incidents are increasingly common in this region. People who have been unjustly arrested are killed in many instances rather than being released. Knowing of his injuries and arrest, his family held a memorial service and grieved his passing. But back in the United States, a different battle was raging.

Pastor Sam Ngala oversees the church planting efforts amongst Burmese and other ethnic groups from Myanmar in North America. His primary focus is to train and equip church members to reach their refugee and immigrant communities. Together with like-minded friends, he has organized a task force team called “Friends of Refugees” whose purpose is to plan evangelistic outreach to refugees in North America by addressing their physical and practical needs. He actively pastors two Burmese congregations, one in Indianapolis and the other in Fort Wayne, Indiana. During the COVID-19 quarantine, his ministry focused its efforts on media evangelism. His wife, Eh Paw, and his friends led in producing many sermon series broadcast online. Non-Adventist Christians heard the programs and began asking their pastors, “Will you please invite Pastor Ngala and Eh Paw to speak at our church?” These requests have resulted in invitations for Pastor Ngala to share the three angels’ messages with these congregations.

Pastor Ngala and his wife host two small Bible study groups in their home each week. These studies nurtured five souls to baptisms last year, with more candidates studying for their upcoming baptism this summer. Pastor Ngala credits these baptisms to countless hours he and his wife have spent in prayer over these families. In fact, prayer is a central focus of his ministry. He has established a prayer initiative in his churches, which includes setting aside one Sabbath per month for fasting and prayer. It was just such prayer, battling “against spiritual hosts of wickedness” (Eph. 6:12), that rescued their brother back in Yangon.

Upon hearing of the shooting incident, Pastor Sam’s congregations and believers around the world began fasting and praying, especially during the Pray for Myanmar prayer sessions.* Even after the memorial service was held by the family, Pastor Sam’s church members here in America kept praying for the release of their brother in Myanmar. Several weeks later, the police released a number of detainees. One of them was this prayed-for brother. Not only was he released, but his wound had healed while he was in prison.

Your gifts to ASAP’s Greatest Needs fund help provide salaries for leaders like Pastor Sam Ngala. Their work is changing the lives of people around the world now and for eternity. Thank you for your partnership in this ministry. Prayer matters!

*A nightly intercessory prayer meeting for the people and country of Myanmar that took place every evening via Zoom. It started the same evening that the military seized control of Myanmar’s government. 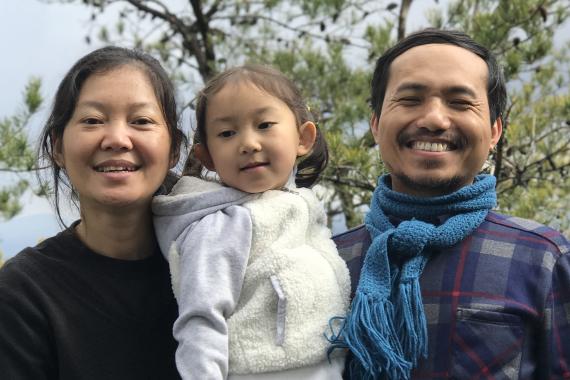