A spiritual giant in the form of a humble, compassionate woman, Judy Aitken’s life was characterized by a commitment to others and a passion for local and foreign missions. God directed her path on a trajectory dedicated to building His kingdom throughout more than forty years of missionary service.

The oldest of three children, Judy May Aitken was born on May 2, 1943 in Joplin, MO, to missionary-minded educators, Dr. and Mrs. Boyd Olson. Soft spoken and introverted by nature, Judy enjoyed academics and was a good student. She dreamed of studying medicine, but pursued nursing instead at her father’s urging. She began studying at Union College in Nebraska and then transferred to Pacific Union College in California.

Upon graduation from college, Judy married Jerry Aitken, whom she had met in college. Their son, Jay, was born two years later, and soon after they received a call to go to Thailand as missionaries. While serving there, their two daughters, Jolene and Julia, were born. Judy would always say that she loved Thailand, and she had a fondness for durian fruit.

During furlough, the family moved to Berrien Springs, MI, where Jerry studied in the seminary. Judy worked as a homemaker and nurse and volunteered with REACH International. One day, in 1979, she picked up a copy of Time magazine and was moved by the photo of an anguished Cambodian woman and malnourished child on the cover. That same week, she heard a call for nurses to go to Thailand as short-term volunteers for SAWS (now ADRA) to help the thousands of refugees who had fled the brutal Khmer Rouge regime in Cambodia. Judy felt impressed to respond, and that short trip evolved into seven years of sacrifice.

Day after day, as Judy worked in a bamboo hospital along the Thai–Cambodia border, she prayed fervently while treating people who had survived the ravages of landmines, disease, and starvation. Her heart broke as she watched malnourished children pass away. During this time, Judy started an evening Bible study to introduce refugees to the comfort, hope, and peace found only in Jesus. As refugees accepted Jesus as their Savior and began witnessing to their friends the group grew. Judy realized that these people needed Jesus as desperately as they needed medical attention, so she stopped nursing to focus full time on self-supporting ministry, church-planting in refugee camps along the border.

Through God’s blessing, churches were started in several refugee camps, and Judy’s ministry expanded to include Vietnamese, Lao and Hmong refugees. Bibles were provided and new church members were nurtured and trained. In less than seven years, seventeen churches were planted and over 10,000 people were baptized into the Seventh-day Adventist Church.

In 1987, as the refugee camps began to close, Judy returned to the U.S., but her heart remained in Southeast Asia. She could not forget the faces, the lives, and the passion of those she left behind. Shortly after her return, Adventist Frontier Missions (AFM) hired Judy as a refugee coordinator. In this capacity, she made frequent trips abroad and worked closely with the Southeast Asia Union Mission (SAUM) to help establish the Adventist Church in Cambodia. Six years later, SAUM president, Robin Riches, asked Judy to establish a supporting ministry to work with the Mission. In 1995, Judy prayerfully started ASAP, a non-profit organization dedicated to equipping ethnic missionaries to share the Gospel among their own people groups. Endowed with God’s strength and a quiet tenacity, she also used her nursing education to train medical missionaries along with her best friend, Dr. Maryann McNeilus, over a twenty-year period.

Today, ASAP Ministries operates under the leadership of Judy’s daughter, Julia O’Carey, with the same goal of holistic church planting among the poor, persecuted, unreached, and refugees from the 10/40 window. The ministry continues to work closely with church leadership in Southeast Asia, supporting over 600 ethnic church planters, teachers, and medical missionaries, as well as more than 70 schools. In Cambodia and elsewhere, many of the district pastors trace their spiritual roots back to their time as refugee camp church leaders alongside “Mother Judy,” as she was affectionately known.

Judy remained active in the Berrien Springs community until her passing. In addition to serving as part–time Development Director at ASAP, she volunteered with the breast cancer society and served as an elder at Pioneer Memorial Church. She was also very active in the lives of her eight grandchildren, whom she dearly loved. They, along with her many spiritual children and grandchildren around the world were the subjects of her consistent, fervent prayers.

On the morning of December 10, 2018, Judy peacefully fell asleep in Jesus at her home in Eau Claire, MI, with her daughters at her side. She left in the same manner she lived her life: peacefully. Though cancer swiftly took her body physically, her mind remained sharp and her spirit strong, allowing her to commune with Jesus, her Best Friend, till the end. She leaves behind a legacy of compassion and a shining example of a life lived for Jesus. 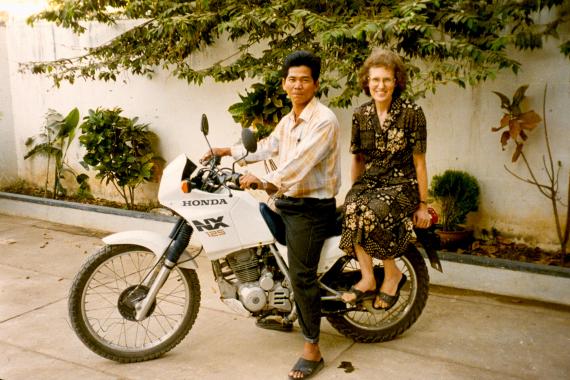