“They’re here! They’re here!” the children cried. They had been waiting all summer for the Rise High day camp. In August, three college students and a newly married couple traveled to Houston, Texas, to help the Reach the World Next Door staff and local church members present a three-hour program for six days at an apartment complex full of refugees.

Many refugee children wore traditional clothes from Afghanistan. “I started to feel like I was in a different country,” laughed Andrea from Washington. When a little girl took her to use the bathroom she found cushions lining the living room instead of couches.

Another volunteer, who had made many Middle Eastern friends elsewhere, started the program each day with a story of a Bible prophet. His prayer in Arabic brought a seriousness to the energetic children that helped them sit still and listen.

When the story was over they jumped up excitedly to make a craft with glue, glitter, scissors, and paints. Six young people worked hard to help the 30 children produce little masterpieces.

“I think that I learned more patience as I worked with the children during the summer camp,” reported Emilio Diaz. “It helped me be a better leader.”

“I had fun making butterflies and little bottlebrush animals with the children,” said Jade, Emilio’s sister. “It was hot, so it was fun getting wet as we tried to fill a bucket with water using sponges.”

Brother Benjamin said, “I had fun when my dad showed the children how to build a bench, and taught them to work together to finish the project.”

Pastor Bernabe Diaz, explained, “I purposefully brought ugly-looking wood and a scraper so that children could see that something ugly can be beautiful when it is cleaned, even if it is painful. The children need to allow correction and scraping away of the bad in order to be beautiful and useful for God.”

Josiah Griswold noticed that the children looked to him and his friends for guidance. Often, when it was time for a new part of the program, he called them to follow him and ran ahead to show interest. He used a green snake puppet as he told how God had protected him in Thailand.

Michael from North Carolina said, “My favorite memories were the times I spent working with one little four-year-old boy. I entertained him between activities by playing rock-paper-scissors.”

Joella Meyer, who led out in the Rise High program bi-monthly last year, was thrilled to witness the long-term impact of this outreach.  “I remember when we started Rise High. Some of the children didn’t want to sit and listen to stories, but this last week, they listened and enjoyed learning. The older ones are now more willing to help the younger ones. ”

Joella was especially pleased to see the children come every day from a family that had arrived from Afghanistan only two months previously. She had brought a bunk bed to their house and helped set it up. The parents and the children eagerly asked questions, even about spiritual matters.

Marleny Diaz also noticed how the children remembered. “Many of them can retell stories almost word-for-word,” she shared. “Rise High has been a powerful outreach tool in the Muslim refugee community. It breaks stereotypes that Christians are hypocrites who do not follow their own Bible as they realize that we follow the Bible’s teachings about food, modesty, respectful family relationships, and honor God above all else.”

Andrea’s husband Solomon, a mechanic who took the week off to help, visited one of the fathers in his apartment. He was moved to hear the father express his gratitude for the good things his children were learning.

Michael stated, “The Muslims that I was spending time with had no idea about many of the beliefs that we Adventists generally take for granted. I began to question how well I would actually be able to explain my beliefs to them if given the chance. I'm inspired to dig deeper now.”

Cindy from North Carolina shared, “I did not realize how much work still needs to be done in the United States. During the week, God reminded me that He laid down his life for these children. It was our privilege to show them the love that Christ showed us.”

It was a joy to participate in the Rise High program. We hope that many churches will be inspired to do something similar in their cities. 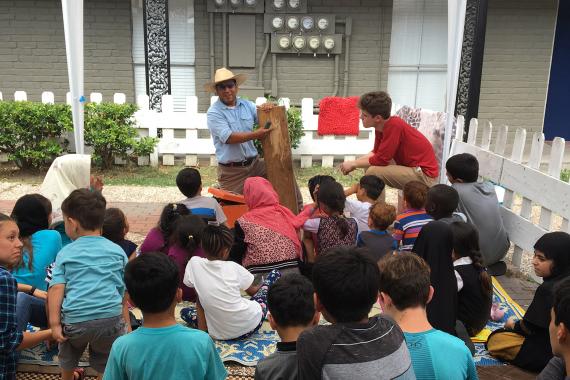