BY JULIA O'CAREY (from an interview with Tony,* an ASAP church planter in a closed country)

As I finished sharing the story of the prodigal son in Luke 15 with a small group of house-church members, I looked up and my eyes met deep sadness. Tia* sat there in silence. I knew she had a story to share. When Tia spoke, her voice was filled with remorse. “I am that prodigal!” she said. “I used to follow God and attend church on Sunday but I stopped going when my life got difficult. In my loneliness, I turned to alcohol.” The woman hung her head.

“You are in church now, though, so that’s a good thing,” I said, in an effort to encourage her. I understood the shame and disgrace she must have felt, especially since our culture and community greatly look down on female alcoholics. Tia was 62 and struggling with a major alcohol addiction.

In that moment I didn’t hesitate. I knew what I needed to say. “Would you like to give your whole life over to Jesus once again?” I asked. The Holy Spirit was working. I saw a twinkle of hope enter Tia’s eyes and she immediately responded, “Yes, I want to give my heart to Jesus. I need Him! I have tried to stop by myself and cannot.” The other church members and I circled around her and bathed her in prayer.

Tia remained alone no longer. There was no need for her to mourn the husband who had abandoned her and adult children who were married and gone to live their own lives. She had a new family now, the family of God. Even though Tia lives more than two hours away on an island that’s not easy to get to, I visited her every month. And when the pandemic restrictions prevented travel, I called her every Monday and Wednesday to study the Bible together over the phone. It has been seven months now and I believe she will be baptized before the end of this year (2021). I find so much joy in seeing how Jesus is transforming Tia’s life.

God has been working steadfastly alongside Tia in her journey. After three months of studying the Bible, she gained complete freedom from her addiction. Tia then decided that she wanted to eat a healthy diet according to the Bible. When she was convicted of Saturday being the Sabbath, she started praying for a job. (This, too, was a triumph for Tia, since she could not hold down a job when she was an alcoholic.) Soon after, God helped her find a good job sorting fish for a company that gives her Sabbaths off!

Tia was once known as the neighborhood drunk. Now she is known for her strong faith in her God, the Father that always welcomes back prodigal sons – and daughters. Tia is a changed woman, and she wants everyone on her island to know about Jesus! Although she is a new believer, Tia is not shy to lead out in the house church, and she shares her testimony with whoever will listen.

*Names have been changed and stock photos used to protect the safety of God's workers and those they serve. 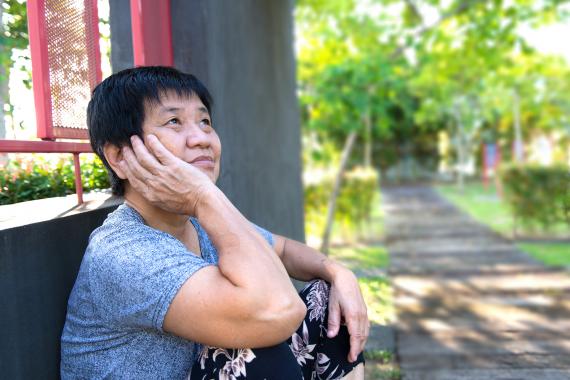