When Lynetta joined the Seventh-day Adventist Church last January, I don’t think she realized how big her new family was. As a child, she fled the Cambodian genocide, just barely avoiding soldiers and landmines. Coming to America, she discovered Jesus’ love while pushing through the difficulties of raising five children mostly on her own. She was struggling to keep her water spinach business going when Lucio and Anna, volunteers with Reach the World Next Door, met her in Rosharon, Texas.

Lynetta’s challenging life became richly blessed as she learned and followed new truths that Lucio and Anna taught her. Her health radically transformed as she followed the health principles. Her finances improved as she enjoyed the Sabbath rest. She became excited about the soon coming of Jesus.

Lynetta opened up her home for others to join a small group Bible study. In time, she and Phaly, a Laotian neighbor, were preparing for baptism. Soon we realized that the nearest English-speaking churches were a bit too far away, and the English probably too complicated, to effectively impact this community. Instead, we wanted to start worshipping together on Sabbaths in Rosharon.

But where could we meet? Lynetta’s house was a mess because of Hurricane Harvey. Three years after the flood, an organization was about to level it and build her a new home. She built a large workshop and had planned to move everything into it while they built her house. Instead, she offered the workshop for our little church group to use.

It worked perfectly. Every Sabbath the group came together and a message was preached in either English or Spanish, with translation into other languages, including Laotian. Those who came shared their praises and prayer requests. Lynetta was realizing that she had a family—a church family.  Sometimes they even helped fix her greenhouse.

However, the little church had a small problem—there was no bathroom readily available. One visiting Cambodian Buddhist said after Sabbath school, “I have to go to the bathroom.”

I whispered, “Sorry, we don’t have one yet.”

He whispered back, “I guess I’ll need to go home.” That’s when I knew we really needed to do something to find some sort of a solution to keep our visitors there.

My wife Julie and I live two hours away, and our church membership is at the Conroe Seventh-day Adventist Church. One day Julie was sharing about this situation with a friend named Maria. Maria became really excited. “We have to build them a bathroom!” she exclaimed. “Let’s plan a fundraiser, a whole weekend event!” Did Lynetta know her new church family also lived in Conroe and were now interested in her? She was about to find out.

Soon Maria gathered a group of friends from the church and they began to plan menus, a special seminar, and advertisements for a weekend they would call “Growing Families Stronger through Crisis.” Many families signed up, paying for cabins, tent spaces, and meals. The group was concerned that this event might not raise enough funds, so they added plans for an International Food Fair on the Sunday of that same weekend. Friends from other churches promised to make food from Africa, China, Laos, Mexico, and Vietnam. Just how big was Lynetta’s new church family?

The weekend was a success, with over $6,000 raised. Now we just needed qualified people to build the bathroom—at no expense! Two new families showed up to worship at the Rosharon church plant. They were contractors. Quickly, lay-leader Jose Rivera got them involved. They laid plans and prepared the plumbing and had the concrete poured. God knew exactly what He was doing.

Meanwhile Pastor Saeng Saengthip and Pastor Ko Saelee arrived from Michigan. They had been wanting to come on a mission trip to help Rosharon for a long time. This was the perfect opportunity. These trained pastors are originally from Laos and Thailand. They have often made their own living through various businesses, including construction, so they knew just what to do. As Lynetta watched them dig in to help, she began to truly understand that the Seventh-day Adventist Church is a worldwide fellowship committed to helping its brothers and sisters.

Phaly and his wife, Kak, soaked up the Christian love, too. The pastors stayed at their home, eating, working, and worshipping with them in their common Laotian language. It had a huge impact on this family, since their faith is young and they have had little opportunity to know other Laotian members.

With the help of many volunteers, the walls and roof went up quickly. Pastor Ko stayed an extra six days to help with electricity and plumbing. Lynetta could feel the blessings overflowing. She invited her Cambodian friend, Huang, to join them for the evening Bible study to share the joy. It’s pretty clear to Lynetta that her huge new family is not just for her; it is a family created by her Heavenly Father that is big enough to receive anyone who will come. And now there is a bathroom so that any visitor can stay from Sabbath school through church and all afternoon if they want.

When we came to Houston, Texas, four years ago, we had no plans to minister to the Rosharon Cambodian/Laotian community; it was too far away. Nevertheless, they were on God’s heart, and He opened the doors. He moved on the hearts of many people to reach out and care. He knew they needed to be part of His family.

Where is He moving today that is near, or far, from you? How does He want to use you, His child, to reach out to someone who will one day also call God his or her Father? Be prayerful. Be watchful. Be ready, because soon Jesus will return. And Heaven will be much more fun with a very big family! 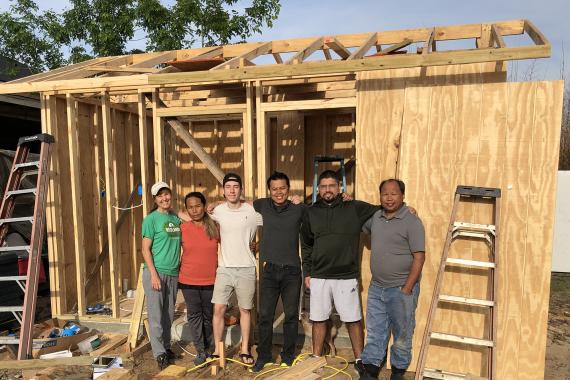