North America: The Mission On Our Doorstep 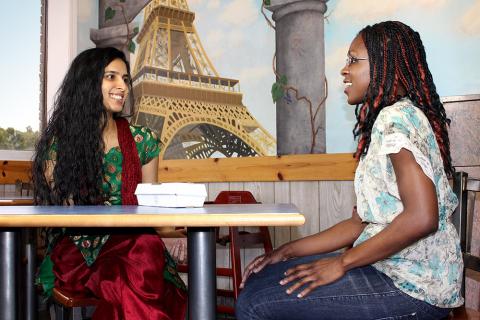 Have you ever longed to be a missionary to a foreign land? Did you know that there is a very important mission field right on your doorstep, right in our homeland? The United States accepts more refugees from needy, war torn areas of the world than any other country in the world. In 2008, over 60,000 refugees were accepted to be resettled in cities all across the country. That number increased to 80,000 in 2009. Canada is the country that accepts the second largest number of refugees. The U.S. government also accepts over one million legal foreign immigrants every year. And, over 600,000 International students come to study in the U.S. each year. All these facts represent an incredible and unprecedented golden opportunity to reach the world through these so called ”strangers in our midst”.

The last ten years have seen one of the greatest migrations of people in history. It is when people are displaced that they are the most open and receptive to the gospel. Many of these refugees and immigrants come from areas of the world where we cannot send missionaries and there are very few Christians. Inspiration tells us : “We should be able to see in the multiplying opportunities to reach many foreigners in America a divinely appointed means of rapidly extending the third angel's message into all the nations of earth. God in His providence has brought men to our very doors and thrust them, as it were, into our arms, that they might learn the truth, and be qualified to do a work we could not do in getting the light before men of other tongues.” {Ev 570}

One of the largest groups to be resettled in the USA in the past three years is the Karen of Burma (Myanmar). One of the only people groups in SE Asia to accept the gospel message in large numbers, they have been hunted and persecuted for decades because of their faith, in an ethnic cleansing war. Under President Bush’s tenure, the doors opened for thousands of Karen people to be resettled as refugees to this country. They are currently arriving every month to cities all across the land. Many of them are faithful Seventh-day Adventist Christians. Coming with their families from primitive refugee camps to urban America, they face huge adjustments. They need our loving friendship and extended hands of welcome and help.

Other Christian groups have seen this need and have large ministries for outreach to refugees and immigrants. It’s time for Seventh-day Adventists to be involved during the window of opportunity that is open right now. Adventists are getting involved in reaching out to the Karen, in places like Utica NY, Atlanta GA, Fort Wayne IN, Chapel Hill NC, San Diego CA, and other cities. Richard Henderson, a layman in Atlanta, spends his evenings and weekends reaching out to the large refugee population he has found on his doorsteps. A Karen church group has been organized, and they are now reaching out to their own community. Another group of Adventists in Atlanta is reaching out to recently arriving Muslim refugees from Africa and the Middle East. Churches in Utica NY and Fort Wayne IN are sponsoring dozens of Karen students to their church schools. There remains much work to be done for these people as well as other refugee and immigrant groups here in America. In many places, the Karen cannot find our churches, or they have been met with a cold reception.

Twenty to thirty years ago there was a large influx of Vietnamese, Lao, and Cambodian refugees to the U.S. Sadly, many SDA believers became members of whatever group reached out to and helped them. We must not let this happen again with the Karen people! Perhaps we have failed to go or to send missionaries to all the world. Has God, in His providence, brought them to us, so they can learn of His great love? Could God be calling you to get involved in reaching out to the mission on your doorstep? His Southeast Asian children are waiting to learn of Him through your involvement. Please pray that God will raise up more laborers and support for this golden opportunity to take the gospel to all the world.

For more information on the newly arriving KAREN REFUGEES of BURMA, see the following links:

About the author: As a child, raised on good Adventist missionary books, Carol Neall Reynolds dreamed of the day when she could be a missionary herself in a foreign land. As a youth, her first experience helping refugees in a Cambodian camp opened her eyes to the great needs of refugees, as well as their openness to the gospel. Later, Carol and her husband, Byron, and three sons served twelve wonderful years in Thailand as cross-cultural medical missionaries. They had great joy in seeing many Buddhists and Animists come to know Jesus as their Savior. Now living in Tennessee, they have found that the mission field has come to them, right on their doorstep. Their dream is to get many more of God’s people involved with reaching the strangers in our midst.