“Ghosts!” the man screamed. His startled wife awoke trembling. It was the middle of the night. Terrified she questioned her husband, “What’s happening?”

“Ghosts have trapped me!” the traffic policeman shouted. “Help me, help me!” Immediately his wife started shouting for the ghosts to go away and leave her husband alone. But it was to no avail, for the spirits continued to haunt and possess Thy Thouen. From that night on, they did not let him sleep. In fact, Thy became afraid to sleep in his own home, and his wife wondered what she could do for him so their family could have peace once again.  She suggested to her distressed husband that they go see Mr. Ouen. “Mr. Ouen can control ghosts and spirits and can cast them out with his magical power,” she told him. Thy quickly agreed. He was willing to do anything to be free from the ever-present torment of the spirits.

When they arrived at the house of the traditional healer (or shaman), they explained their dilemma and pleaded for him to help them. “When did this happen to you?” Mr. Ouen asked. “A few nights ago, ghosts came suddenly and possessed me,” the frightened man explained.

“Don’t be afraid anymore, Mr. Thouen. In three days, I will cast them out of you,” Mr. Ouen replied confidently. “Now tell me, how do they scare you, what do they do to you and what do they look like?”

“They appear with very big wide eyes, holding cell phones in their hands and calling their friends to come and trouble me also.” The terrified man trembled and shook with fear. “Sometimes they beat me badly and leave many bruises until my whole body aches.”

“I see,” remarked Mr. Ouen. “You do not need to worry any further. I will arrest them and tie them with my magical power. They will be helpless.”

The magician tried many things using his special power on the spirits and tried to trick them into leaving the poor man. After many attempts, the man admitted his authority was unable to arrest the ghosts. He defended himself by telling the frightened couple, “These evil spirits are very strong, and there are too many of them for me to be able to help you.”

Mr. Thouen became even more terrified. “They will come and take my soul, and I will probably die. What shall I do? Whom can I ask for help?” the man cried in despair.

“I do know of one man. His name is Sim Thearith.” Mr. Ouen said. “He is a Christian. Perhaps he can help you. Come, I will take you, your wife and child to the Seventh-day Adventist Church so that he can cast out the evil spirits from within you.” Excited at the thought that there was still hope, Mr. Thouen and his family eagerly followed the spirit man down the streets of Sangkhlang.

It was midnight when they arrived at the church and urgently knocked at the door. Surprised at the commotion in the middle of the night and worried about who might be outside, Sim Thearith cautiously opened the door. “What do you need that is so important that you come to see me at midnight?” he inquired.

The man and his wife sincerely apologized for waking the church planter and once again Mr. Thouen told the fearful story. “Please, can you help me?” he pleaded as he finished.

“I cannot help you,” Sim Thearith replied. The faces of the couple fell in disappointment. “But I can pray to my Lord Jesus Christ because He can help you. He has the power to cast out evil spirits, but you must trust in Him and His mighty power. Jesus is the Creator of the entire universe. He is the King of kings and Prince of princes. He loves all of us and cares for us so much that He gave His own life for us. That is the true kind of love.”

Mr. Thouen’s wife begged for help and then shouted to try to cast the evil spirits from her husband. The patient worker of God talked softly to them. Mr. Thouen further described the torture of the demons. “They visit me often,” Mr. Thouen informed Mr. Thearith. “Some of them are pregnant, some are lame and some are without heads. They have demanded money and gold from me.”

Suddenly as he was talking, the spirits again attacked the man. He ran and tried to hide himself in the church. His whole body was sweating. Frightened, Thy’s wife and child cowered in the corner. “Surely this is his end,” the poor wife thought. “Surely the demons will kill him. I must bring him some water.” Quickly she filled a cup and walked over to where he was huddled. But as she handed him the glass he looked at it and yelled at her, “Why are you giving me water with fish in it?”

“There is no fish in the water,” his wife told him.

“You cannot see because you are blind,” the possessed man screamed at his wife. Sim Thearith took the water from Mrs. Thouen and prayed. Then handing the cup back to her he instructed her to give it again to her husband. The man accepted it and drank without complaint. An hour later, Mr. Thouen was hungry and demanded that his wife give him rice to eat. When Mrs. Thouen offered him the rice he stared at the bowl and shouted, “Why did you put big eyes and hairs in the rice?” His wife was about to answer that she had not put eyes and hairs in the rice when the church worker again took the bowl from her hands and prayed. When the rice was given back to him he made no protest, and silently ate it. When he had finished, Thy fell into an exhausted sleep on the floor.

While he was sleeping, Sim Thearith called several other church members to come and join him in praying for the possessed man. They prayed without ceasing until morning while the man slept in peace. When Thy Thouen awoke, he was completely recovered. Realizing that he was freed from the shadow of the demons, the man exclaimed, “How happy and thankful I am to your God!”

In the upcoming days, Thy excitedly told the story of his deliverance to anyone who visited him. He explained how the living God had overcome the spirits while the traditional healer proved powerless.

When the whole episode was over, Sim Thearith exclaimed, “Praise God for the hope and power that we have in His precious name! We worship and serve the living God who has the power to do anything while other people and gods are powerless.”

Not only did God perform a miracle for Thy Thouen, but his experience also greatly strengthened the faith of the believers. His story is living evidence of a loving powerful God who cares—a story that needs to be shared.

Please pray for the church in Sangkhlang that they will be grounded in the faith, eagerly telling others of God’s healing power. Pray also for Mr. Thouen as a new believer of God that he will stay “possessed” by the Holy Spirit, not evil spirits, and overcome the temptations of the enemy. 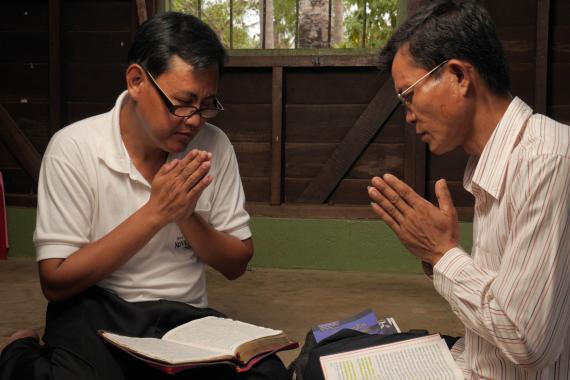