BY DR. MARY ANN MCNEILUS, AS TOLD TO LAURA HOKANSON*

The vision for ASAP Ministries’ medical missionary work began taking shape in 1993 when my friend, Judy Aitken, and I made our first trip to Cambodia. Our purpose was to find workers for the newly reestablished Cambodian Adventist Mission.

Following the turmoil inflicted by dictator Pol Pot, throngs of Cambodians fled to large refugee camps scattered along the Thai-Cambodian border. Here, Judy helped many refugees learn about God and study English. Eventually, under U.N. protection, large numbers of refugees were repatriated. They returned only to find their homes and personal property destroyed or confiscated. Roads were nearly impassable. Schools and public buildings laid in ruins. Dead or missing family members and friends only added to the disparaging circumstances.

Amid these scenes of heartbreaking devastation, Judy and I witnessed God’s guidance in providential ways. We traveled on landmine-infested roads, around blown out bridges and through pockets of Khmer Rouge resistance forces in search of returning church members. We experienced many joyful, tear-dimmed reunions! Working hard to rebuild their lives, these church members were now employed by the U.N. peace-keeping teams at comfortable salaries. Many of them chose to give up these U.N. positions to serve the mission for a much lower income. Their dedication as pastors and mission workers continues to the present.

During that first trip, we saw the widespread lack of adequate food and basic sanitation. Lack of clean water and proper waste disposal contributed to disease, resulting in much suffering. Knowing that true medical missionary work is the gospel in practice, Judy and I realized the necessity to train the new workers as gospel medical missionaries, using simple natural remedies. This training would give them the skills to meet people’s most pressing needs in practical ways.

The Cambodian workers quickly applied the basic health principles and treatments for disease that they were taught. Through their ministry, many people came to know and love Christ as the Great Healer of body, mind, and soul.

Since then we have observed over and over again how the Lord seemed to step out of His way to work supernaturally during medical missionary training sessions. We would pray and the Lord would work. The following quotation became a hallmark of the work as we saw it repeated before our eyes: “Natural means, used in accordance with God’s will, bring about supernatural results” (2SM 346.4). One such example occurred on February 2, 2009, at a training session for medical missionaries from Myanmar serving in Cambodia.

The week before the training session, a young missionary worker, Johan, had gone to the hospital complaining of abdominal pain. Finding no conclusive cause of the pain, the doctor sent him away with medication for acid stomach and nausea. Despite taking the medication, his symptoms grew worse. By the time he arrived at the training session he was in intense pain. Upon examination, I found him in a terrible state, rolling with pain from his rib cage downward. His abdomen was bloated with diminished bowel sounds. He could neither eat nor sleep. He became the object of our training session. I had one group of students make a large charcoal compress which we applied to his abdomen. Another group prepared a hot water bath for his feet. Another group kept cold compresses on his head throughout the treatment. As he rested in this position, one of the training session leaders, Pastor Martin Kim, anointed him, and we all prayed. After the treatment, Johan fell asleep. By evening he was feeling better and able to drink coconut water. We repeated the treatment several times over the next few days. During this time, we talked to him about diet and ways he could keep his digestive tract healthy. By the end of the training he had made a miraculous recovery.

In the twenty-plus years that I have worked with ASAP, I have observed many healings such as this. When the faith of the ASAP lay pastors’ was strong, God worked mightily. Healing miracles happened when all the credit was given to God. “And the prayer of faith will save the sick, and the Lord will raise him up. And if he has committed sins, he will be forgiven” (James 5:15).

*Portions of this article are adapted from the preface to God’s Healing Way, a medical missionary manual written by Dr. McNeilus. 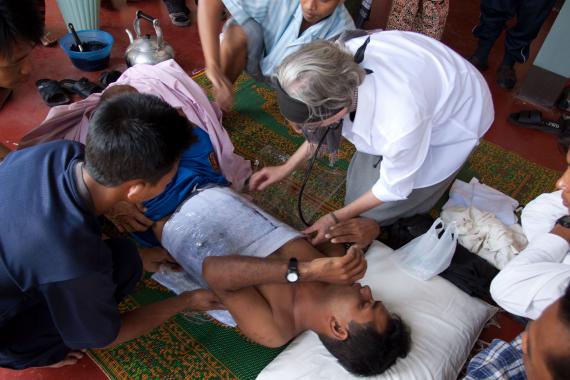