From Marginalized to Missionary

BY JULIA O'CAREY WITH JOHN PRESS

What inspires you to get out of bed in the morning? What compels you to persevere in the face of challenges? I would like to propose that it isn’t just the blood pumping through your body that moves you and the food you eat that fuels you. Here at ASAP Ministries, our driving motivation is our mission! It is what makes every mundane task worth it. The mission of salvation is what energized Jesus, too. He says in John 4:34, “My food is to do the will of Him who sent Me, and to finish His work.”

So what exactly is ASAP’s mission?

ASAP Ministries empowers local missionaries to restore and disciple the marginalized with the wholistic gospel.

Although the words we use to explain it have changed over time, this has been our mission from the start! I remember my mother, ASAP founder Judy Aitken, mentoring Hang Dara, a newly baptized Cambodian refugee in the refugee camps in Thailand. “You can do it through Christ’s strength! You can lead the church!” she said with a smile. Though he was a baby Christian, Hang Dara stepped forward in faith, and God took him from a life of anger and hopelessness to a life of purposeful ministry. Recently, he stepped forward in faith yet again, accepting a call to serve as the president of Cambodia Adventist Mission.

The process of transformation from marginalized to missionary is more than just ASAP’s legacy. It is a miraculous testimony of God’s power and grace, and it continues today. My heart swells with joy each time I meet one of our missionaries and hear where they came from - poverty, displacement, brokenness, darkness, or fear - and witness what Jesus is doing through them now. The story of a young man named James* is a great example.

James survived a traumatic childhood in eastern Shan State, Myanmar, thanks to a local Seventh-day Adventist missionary, Mrs. Pasaw Htee. This godly woman dedicated her life to rescuing children in the Golden Triangle, a drug-trafficking hotbed at the convergence of Myanmar’s eastern border with China, Laos, and Thailand. The boarding schools she established, including ASAP’s Canaan Adventist School, became safe havens amid this violent, drug-addicted region. Over the years, she adopted several of the students as her own children, including James.

Mrs. Htee’s sudden passing in 2011 left some of these children orphaned once again. James was only six years old at the time. Myo,* a relative of Mrs. Htee, took him in but James argued and fought with the other eight children in the household. Worse yet, Myo’s oldest son was a drunkard who often stole from his parents. He taught James to steal, too. Soon James was branded as a little thief and marginalized by his adopted family and the community.

“I heard much gossip about James,” remembers Ko Ko,* an ASAP medical missionary acquainted with the family. “Myo came and told me that he wanted to give him up.” But no one wanted James.

“One day, I heard that Myo had beaten James for stealing a cell phone and 80,000 kyats (about $45) from him,” says Ko Ko. “James had run away from home because he was scared of Myo. I was so sad for him.”

Ko Ko and his wife discussed the situation. They already had two daughters of their own, both with special medical needs, and they did not see how they could afford to bring another child into their home. However, Ko Ko himself had once experienced redemption from a life of addiction and crime through the intervention of a kindhearted relative. Perhaps this was an opportunity to play the same role in the life of this troubled boy.

“I thought about Mrs. Pasaw Htee and how she had sacrificed her whole life to share the gospel with so many children. James was one of the fruits of her labor, and I felt so sorry to see what was happening to him.”

Ko Ko and his wife adopted James as their son, but soon they wondered if they had made a mistake. James had so many bad habits. “Sometimes my wife cried because of him,” Ko Ko confides, “but we didn’t give up on him. We prayed for him, tried to correct his mistakes, and sent him to school.”

It took time, but eventually Ko Ko noticed changes taking place in the young man’s life. James was trying to overcome his bad habits, and he began helping at the health center where Ko Ko manages a team of ASAP medical missionaries reaching out to poor Buddhists in nearby villages.

When schools across Myanmar closed due to the Covid-19 pandemic, Ko Ko began giving medical missionary training to James and other high school students who could no longer attend classes. “We traveled from village to village, helping patients,” says Ko Ko. “I noticed that James was really interested in this work. One day, I asked him to go with me to see one of my patients who had a swollen mass. The doctors had given up on her and said her case was hopeless. I showed James how to treat her and asked him to go and take care of her every day.”

Ko Ko loaned James a motorbike and money for gasoline and medical supplies. The young man faithfully visited the ailing woman, treating her as Ko Ko had shown him, and encouraging her to have faith in God’s ability to heal her. Over time the woman’s condition improved, and Ko Ko and James praised God.

“The village where the woman lived was a new area for us to share the gospel,” explains Ko Ko. One day when James was visiting this village, he met a local Buddhist monk suffering from skeletal tuberculosis. James prayed for the monk and gave him treatments he had learned from Ko Ko. As a friendship developed between the young man and the monk, James shared the story of Creation and the love of Jesus with him. Now the light of the gospel flickers in this unreached place, thanks to James’ faithful service and the transforming power of God’s love.

Ko Ko believes that James has found his calling. “He was once considered a little thief, and no one wanted him. But now he has become a good missionary, as his mother, Pasaw Htee, wanted him to be.”

Today, over six hundred Spirit-filled ASAP missionaries across Southeast Asia are reaching out to the hurting and the marginalized. James has joined them, guiding others along the same path of restoration and discipleship that he once followed. Currently James is leading a small Bible study group and continuing his training as a medical missionary under Ko Ko. Soon he will take charge of one of several new branch health centers that Ko Ko plans to construct in neighboring Buddhist villages. James’ story is a picture of ASAP’s mission in action - another life transformed from marginalized to missionary! And the cycle continues. 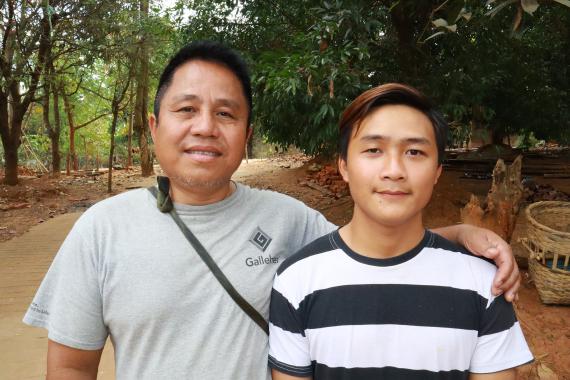