On August 30, 2017, when the students were supposed to arrive for the new Reach the World Next Door training program, the airports in Houston, Texas were closed because of Hurricane Harvey. A week later, the waters had receded enough for ten students to arrive and for the devastation of thousands of homes to be clearly seen. I knew this first year was going to be unique. There was a work to be done to help Houston rebuild.

Soon, I was able to talk to Lisa Oun, a dedicated church member in Houston whose husband is Cambodian. “How is the Khmer community?” I asked, knowing her in-laws lived where about 150 Cambodian families had built up a village south of the city in Rosharon. There, they grew greens, had a Buddhist temple, and lived a life reminiscent of their homeland.

“Terrible,” was Lisa’s quick response. “It is so sad I can hardly stand it. Many have lost everything--their homes, their furniture, even their cars.”

“How can we help?” I wanted to know. She quickly arranged for us to visit the village. When we arrived, disaster response volunteers immediately put our whole missionary team to work visiting every home to assess the needs. Within three hours, we covered the area and had a good idea of what houses needed “mucking out” and where there were sick people who needed medical care. We discovered a few Laotians and Spanish-speaking neighbors, as well.

Over the next few weeks, we traveled to Rosharon whenever we could. Moldy sheetrock and soggy insulation had to be pulled out. Many of the houses had been flooded with three feet of water. Some even six.

Our students learned to install and finish sheetrock. They advised people how to stay healthy, and gathered a group at the temple to teach them about NEWSTART health principles. Friendships grew between us as villagers shared oranges, coconuts, and doughnuts. 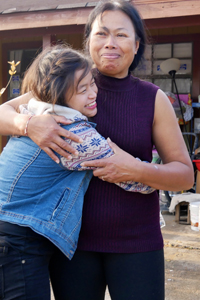 By Christmas, students were eager to give gifts to their new friends. They decided to make cookies, share a picture of our group, and give them a pamphlet we wrote about the true meaning behind Christmas. We even offered it in Khmer, as well.

By January of this year, we could see a growing openness to spiritual things. Rachel and William, two of our students from Taiwan, fixed some vegetarian food for their Laotian friends to try. “Come say hi,” Rachel called. My son Josiah, Antoine, another student, and I went in.

Their house was just a tent. They had nowhere else to live because their home had been destroyed in the hurricane. The wife opened up a big basket of sticky rice. “Yum,” I said. “That looks just like what we enjoyed in Thailand!”

“Help yourself,” the husband, Joey, smiled. We sat down, feasted and chatted a little in Thai, which most people from Laos understand.

Just when I thought it was about time to go, William spoke up. “Can I read you a story?” he asked. He had brought a book on creation for their grandchildren. The kids weren’t there, but he didn’t want the opportunity to pass.

“Sure!” they said. I realized the lady couldn’t understand English well, so I began translating as William shared. The couple soaked up the story.

William concluded by saying, “This world is not like it was when God made it. He wants to take us to heaven where there is no more suffering.” Then he added, “But how God will accomplish that is another story for another day.” That’s how Bible studies started in the home of this couple from one of the least-reached people groups in the world.

Another student, Eh K planned a lesson about the Flood for the Laotian couple. Eh K also speaks Thai and has worked alongside Joey helping his neighbors build their shack. As we headed for the study, Eh K said, “I have the lesson prepared, but I want to know if they have questions that we can help answer.”

They surely did. Joey said, “Why am I still suffering, living in a tent like this, after all the years I have worked hard and done good?” He added a little later, “Many people where I’m from say bad things happen to us because of something bad we did in a previous life.”

We opened to John 9 where Jesus’ disciples asked a very similar question regarding the man born blind. Jesus made it clear that his suffering didn’t come from his sin, but was an opportunity for God to show His goodness by helping him.

We also pointed out that much suffering comes because of evil spirits, and that we are caught in a war and get injured like civilians often do. Shortly afterwards we asked Joey what he should do if evil spirits harass him. He answered, “Pray, I guess. Pray to mama and papa, to whoever is out there.” 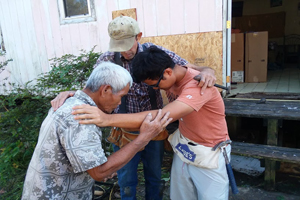 We realized his understanding of God wasn’t so clear. He then added. “I think to angels and God, too.”

His wife quickly added, “No, angels and God are different.”

“Yes,” I said, “God is the one who created angels, just like He created humans.”

She looked at me very seriously. “Oh,” she said, pausing for a long time. “Then this God is really big. He’s the biggest.”

There was a clear dawning of understanding in an area we had assumed they knew. It was a great reminder of the huge need among the refugees and immigrants God has sent to America. Our students are now involved in five Bible studies in the Rosharon village, eagerly praying for God to lead them to a solid, saving relationship through Jesus.

Please pray for this mission field. Please invite young people to apply to be missionaries with us in the next training program, which starts at the end of August. Please pray for God to send our present students to where He needs them. Please join us to Reach the World Next Door. 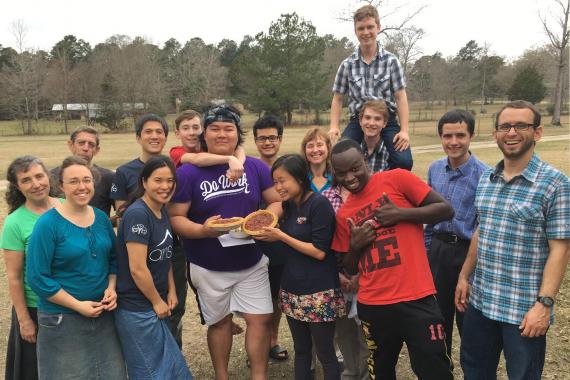