My name is Chomnath Long. I was born in Cambodia on the Sabbath Day on August 24, 1955. It was a very special time because the government had just completed a new hospital. Three days before my birth my father had moved our family to live at the hospital where he worked. He was a nurse as well as the pharmacist who ordered medication for the entire country. My family was large at the time, I was the fourth child. Later my parents would have two more children. In all there were three girls and three boys. My family was not Christian, but my mother would make the sign of the cross with ashes on her babies and over the door posts and windows of our house.

I went to school and my father wanted me to study in Europe to get a good education so I could save people like he did. However, those plans were put on hold from 1975 till 1979. In Cambodia the communists under Pol Pot wanted the people with knowledge to die. Pol Pot’s soldiers made people leave their homes. I’m not talking of a few people; it was like a flood of people. No one wanted to leave their homes; no one was fooled by the soldiers’ lies that it would only be a few days. The people only left because the soldiers had guns. They made us walk by foot. Some died by the wayside; others left their babies alongside the path. They took us to a place where we had to work hard labor, planting rice, corn, and watermelon; but they would not let us eat it. They did not give the people enough food and many starved to death.

But the Lord, even though I did not know Him yet, helped me. Before Pol Pot, my mother had let a man we called Uncle Bahn use some of our land so he could provide for his children. He had a bicycle with a platform attached to it to give people rides to earn a living. When Pol Pot’s soldiers took over we would put rice on the platform so we had some food.  I would find ways to hide rice and beans when I was working in the fields. I would go out in the fields at midnight to get food and bring it back to my mother. Once I was caught. They let me go even though the normal punishment would have to put me in chains. I could write well so I wrote letters for people. Because the Lord gave me wisdom about how to phrase these letters to the soldiers the people were able to use the letters to gain permission to go home for emergencies. I was always thinking of ways to help people. In general people would fall before they would die. I told the people to pretend to fall before they got to that point so they could be taken for medical care. I would volunteer to take them to the hospital, so they could survive and get stronger.

Despite what was going on around me I was not afraid. I lost my father, uncle, two brothers and many friends in the killing fields. Before people died they would look into my eyes and ask, “Chhomnath, why do I have to die?” I would stay with them and hold them, but I did not know what to say. My heart broke when children died. Every time people suffer, the Lord is with them. Millions of people died.

The Holy Spirit was in my heart, although I still did not know the Lord. I would think about why so many people had to die. I had a dream that my Father, not my earthly father, was something great and I was becoming His child. It was so amazing! Waking up to life during Pol Pot was difficult. During the killing fields they forced me to marry someone I did not love. I cried because that meant I could not go to school like I desired because in Cambodia if you were married you couldn’t go to school. Six months later I got pregnant. In April, 1979, Cambodia was liberated. While walking pregnant from the killing fields to my husband’s home town I prayed, “Oh God, I cannot go to school. Please bless me with a son or daughter who has a wise and understanding heart to save the people of the world.” Several months later I gave birth to my son. People would tell me I had some great destiny. I could not agree at that time. My husband was unfaithful to my child and me so I told him to go with that other person. How could I have a great destiny when everything was so terrible?

I arrived empty-hearted at Chicago’s O’Hare Airport in February, 1992. I was so overwhelmed by all I’d been through with the killing fields and my sister refusing to help me that I felt no one truly loved me. Even though I was in the United States my heart was still in Cambodia. I started to work very hard at a graphics arts business to try to get what happened to me out of my mind. I was also sending much of my earnings back to Cambodia to my family to help the poor and hungry there.

My sister and brother-in-law in America, my employer and others tried to convince me to stop sending all the money back to Cambodia. I wanted to save the people and would not be convinced to cease my efforts. How could I hang on to money when I had seen people die in the killing fields? I couldn’t just turn my back on them and walk away. I couldn’t let people die. If I had a hundred million dollars in the bank I would send it to them. If I only had five dollars I would send it to them. Everyone called me a disgrace to the family for sending all the money to Cambodia. I did not pay attention to what people said; I listened to my heart. I had three jobs. I struggled with anxiety and depression; because no matter what I did it was never enough to save all the people.

One night I fell into a deep sleep. I saw the Lord in a dream. He had a brilliant face and an ivory garment. He was dressed like a judge and he looked at me seriously.  He told me that people have different hearts and that I was on the way of life. Even though I did not know Him, the Almighty loved me so much He came to me and showed me His glory during my hard time. I told the Lord that I wanted to know His story. I watched a film on Jesus and I then understood what the cross was that my mother used to put on her children and the house in Cambodia. I began to read the Bible and pray. He gave me the verse Luke 10:22, “and no man knoweth who the Son is but the Father: and who the Father is, but the Son and he to whom the Son will reveal Him.” The Lord began to reveal more and more of Himself to me and I began to fall in love with Him and came to know Him as my personal Savior. One night in a dream I heard a voice like many waters or like heaven tell me, “Go to Church.” He also told me, “Go east!” I asked the Lord, “Where is my Church,” because I had made a mistake in being a Buddhist when I was in Cambodia, and I now knew that was not the truth.

One day my son had to go to the emergency room and I met a woman there named Sheila who would go to the hospital and pray for mothers with their new babies. She belonged to the Joliet, Illinois Seventh-day Adventist Church and I began to go there and study with them. Later, the Lord moved me to Glendale Heights, Illinois and I started to attend the Glen Ellyn, Illinois Seventh Day Adventist Church. I was baptized there last year. I prayed and the Lord sent Nancy to be my prayer and ministry partner. I told my mother and sister in Cambodia not to go to the monk any more. I taught them about the Lord and planted a Church there for 30 people. At this time there are seventy adults and over sixty children worshiping at that church.

I still send money to my sister and she uses it for rice for the poor and starving there. They call me mommy because I feed them. They started praying and fasting that I would come to them. I did not know my Church was doing this, but I was unexpectedly laid off from my job so I am free now to go see them. When I go to Cambodia I am also requesting an audience with the King of Cambodia. I have been asking the Lord what I can do to help my people. I thought that maybe I should write a book or article, but the Lord impressed me to talk to the King. I was impressed to tell the King to change Cambodia’s name. I think this is like when the Lord changed Jacob’s name from Jacob which meant a trickster to Israel meaning the one who had prevailed with God. I am just staying in Cambodia for two weeks, but I will ask permission to come back for six months. The Lord taught me you have to dream big and ask for big things.

If you believe and trust in the Lord He will move everything and turn this world upside down. Pray without ceasing. When two people pray together who love the Lord, they will touch the Kingdom of Heaven; the windows of heaven will open. I want you to know that The Lord is with you always; when you are in the worst of conditions like I was in the killing fields or at a high point like I was when the Lord revealed Himself to me. God bless you always. 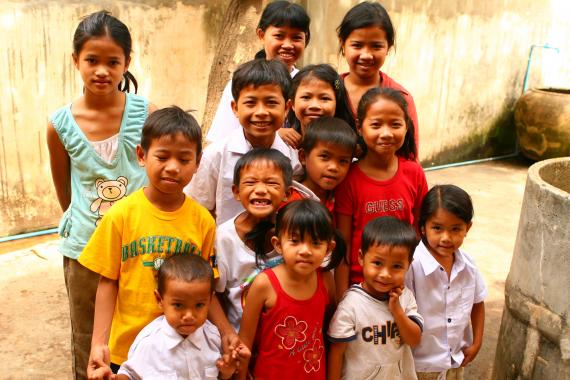