BY JULIA O'CAREY AND JOHN PRESS

As the shock of their father’s words wore off, reality set in for Sok Chea and his seven older siblings. Their mother had died five years ago. Now, their newly remarried father had informed them that he would not support them anymore. Suddenly, they were alone. Orphaned.

The siblings vowed to stay together and take care of each other, but they struggled to make ends meet. Eventually, Sok Chea and four of his siblings moved to Phnom Penh, hoping to fare better in the city, where there were more opportunities. But instead they found more heartbreak.

Feeling pressure to provide for the younger children, Sok Chea’s oldest sister got married. It didn’t last, but the failed union left her with two young children of her own to care for, in addition to her four brothers and sisters. She began working as a street vendor. Another of Sok Chea’s sisters found work at a factory, and one of his brother’s began working as a tuk tuk driver. Their combined income provided for their food, the $55 monthly rent for the small room that the seven of them shared, plus $20 per month for water and electricity. However, sending Sok Chea to school was out of the question. His family simply could not afford the informal fees collected by the teachers at the government schools.

Then, they learned about the ASAP-supported Chamroeun Phal Adventist School (CPAS) in Phnom Penh, which serves the children of poor and at-risk families like Sok Chea’s. At the age of nine, Sok Chea could not read and had never set foot in a classroom, but the staff had compassion on the boy and allowed him to enroll in kindergarten. He proved an eager learner, and within months he had progressed to first grade.

Last November, Sok Chea, now 14 years old, entered his final year at CPAS. But as the economic fallout of the Covid-19 pandemic unfolded in Phnom Penh, it hit families like Sok Chea’s especially hard. His sister’s sales suffered. Lockdowns shuttered factories, such as the one where his other sister worked, and left few passengers for tuk tuk drivers like his brother. Sok Chea began missing class and working from morning until evening, helping his sister at the market. With little time to study, his grades suffered, and he grew discouraged. But then Sok Chea remembered something he had learned in school.

“When I was in the third grade, one of my friends was struggling in school. The teacher asked each student to pray for him,” he recalls. “As we prayed, his grades improved, and at the end of the year he passed his final exams. It was a miracle of God!”

With his family facing financial difficulties and his graduation in jeopardy, Sok Chea turned to God again. “I found a quiet place and prayed alone day and night to Jesus Christ, asking Him to have mercy on us and help my family.” God heard Sok Chea’s prayer. Customers began flocking to buy his sister’s food at the market. As her sales picked up, Sok Chea returned to CPAS, and by God’s grace he will graduate later this year.

Now, though, Sok Chea has a new prayer request. “I wish to continue my studies,” he shares. “And I want to go to a school that will teach God’s Word, in particular. I want to learn more about Him and get to know Him better. Please pray for me in this plan, and continue to pray for my family, too.”

Over the years, we have seen promising students like Sok Chea come to our schools hopeless, with no aspirations, and leave full of faith in Jesus. We also know the impact of poverty on their lives and how difficult it is for them to maintain their newfound Christian faith in their Buddhist communities. Spirit-filled ASAP teachers, clothed with “… compassion, kindness, humility, meekness, and patience” (Col. 3:12, NRSV), are often the decisive influence in these young people’s decisions for Christ.

We pray for and value each of the 5,000 children in the nearly 100 schools that ASAP supports. God sees each one, and Matthew 10:29-31 reveals the Father’s compassionate heart towards His precious children. “Are not two sparrows sold for a farthing? And one of them shall not fall on the ground without your Father. But the very hairs of your head are all numbered. Fear ye not therefore, ye are of more value than many sparrows” (KJV).

We know the mountain-sized responsibility of supporting so many students is one that only God can provide for. During our fiscal year-end Compassion Campaign, we ask you to commit a special gift to three key projects helping these children and their families. Already God has blessed this campaign with $100,000 in matching gifts toward our $200,000 goal! Thank you for adding your love gifts and prayers to the Compassion Campaign. 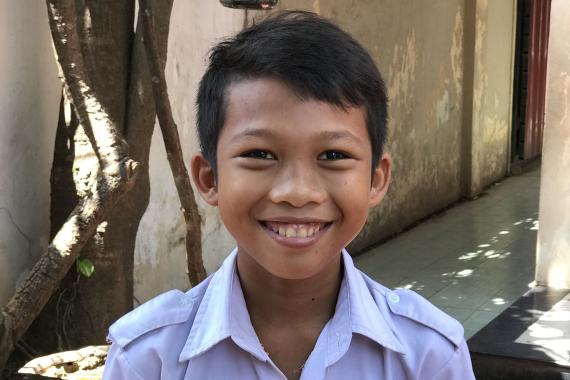