There is a well-known line in The Ministry of Healing that is often repeated during discussions on various approaches to evangelism. “Christ's method alone will give true success in reaching the people. The Saviour mingled with men as one who desired their good. He showed His sympathy for them, ministered to their needs, and won their confidence. Then He bade them, ‘Follow Me’” (p. 143). Recently, an ASAP medical missionary named Sompong put this method to the test. Would it work in Thailand, the country with the most unreached people (61.5 million) in mainland Southeast Asia?

Sompong and her husband, an Adventist pastor, had just moved to northeastern Thailand to serve a three-church district in the Ubon Ratchathani Province. As they prayed about how to reach their predominantly Buddhist community, the Holy Spirit impressed Sompong to start with health ministry. “Especially during this time of pandemic, when we talk about health the people are very interested in it,” she says.

Sompong prepared a community health survey and began going door-to-door to meet her neighbors and learn about their needs. Then, she planned cooking demonstrations and presentations on nutrition, natural remedies, and other topics to address the needs expressed by her neighbors. One day, while going door-to-door, she met a widow named Duen.

Duen sat alone in her house, silently agonizing over her misfortune. Since her husband’s death, the stress of caring for their four children had become too much for her. She could no longer count on her sons for help either. The three young men were battling drug and alcohol addictions, leaving their mother and seven-year-old sister to fend for themselves. Now Duen’s health was failing, and she felt like giving up. At that moment, Sompong appeared at her door.

“I could sense that she had lots of problems,” Sompong remembers. Together with her husband, Sompong began regularly visiting Duen. They listened, offered encouragement and prayer, and talked to Duen about Jesus. As they won her confidence, Duen started attending church with them, but her problems continued to mount. First, all three of her sons were arrested and jailed. Then, after their release, one son attempted suicide. He survived, but the medical bills for his ongoing care left Duen destitute. Sompong and her husband began delivering food when they visited the family. They also raised money to help Duen with her debts. “When I gave [the money] to her, she started crying and thanking God for providing for her,” says Sompong.

Soon afterward, Sompong’s husband held evangelistic meetings. Duen and two of her sons faithfully attended. At the final meeting all three responded to the invitation to follow Jesus and accept Him as their Savior. Recently, Duen (pictured above) and her sons were among 11 new believers baptized through the labors of ASAP missionaries in two different locations in Thailand. And Sompong reports that ten more people are currently taking Bible studies. These are remarkable developments in a country where 88% of the population is Buddhist and there is just one Adventist for every 4,436 people. The Holy Spirit is working through ASAP missionaries using Christ’s method of evangelism to prepare a harvest of souls for the soon return of Jesus!

Two days after their baptism, Duen and her son found jobs at a local rubber farm. With the wages they receive they finally have enough income to support the family. They are thrilled, and so is Sompong. “[God always] provides a way to support the one who is faithful to Him,” she says. “Duen thanks God for new life, not only for her but for her whole fami 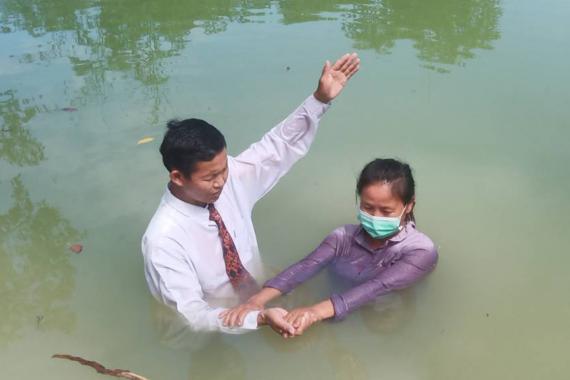