Many miracles are needed when starting a missionary training center by faith. We praise the Lord for the daily miracles we witnessed thus far. First, the miracle of God’s love for the unreached at ASAP Ministries and the Texas Conference. After that God led us to purchase 26 acres on the edge of Houston, the fifth largest metro area in the U.S. and home to many unreached people groups. Then God blessed with the miraculous pulling together of a multinational training staff with experience among Buddhists, Hindus, Muslims, and Native Americans.

Next, as we rushed to overhaul the seven aging buildings, God sent help. Jim Christensen, who found the property, stayed on to help work and members from churches where we gave outreach training volunteered their time at work bees to get the property ready.

We needed at least ten confirmed students, but we were almost to August and only five had signed up. We prayed for young people willing to commit to nine months of mission in a new and untested place and program—and God provided five more!

New students meant we had to quickly extend the men’s dorm. To do that we needed fill dirt. The same morning we realized that, Bill, a friend from the Conroe Church, arrived to grade our driveway, but found he would need to bring in rock first. He asked, “Is there something else I could do?” We told him our need and learned he had a dump truck—and extra dirt on his nearby property. Before the day was up the site was ready to build on. Then as we rushed to be ready and Hurricane Harvey approached, God sent Pastor Saeng, ASAP’s new Associate Director, and Scott S., both with needed building skills, to help for several weeks.

Then when our funds were growing thin, on the last night of ASI, a man came up to Julia and pledged $10,000 more that enabled us to get desks, bed sheets, and other necessities. For the students’ side, though $7,000 is quite low for nine months of training tuition, many were still not sure they could cover it. The staff began to earnestly pray, and God laid it on the heart of another donor to extend $15,000 in matching funds. Immediately we sent out an appeal and within three days, the match was complete with over $17,000 more given or pledged.

When Hurricane Harvey arrived, rain came in torrents and both Houston airports closed. We postponed the start of classes for a week, and as each student—four from Myanmar (Burma), two from Taiwan, one from Burundi and three American-born—arrived at the beginning of September, we witnessed another miracle. Each had a story of how God had led them to come.

As we met together, we all had one thing on our minds. How could we help in the aftermath of the hurricane? A phone call later, we were in a Cambodian agricultural community that had been hit hard by flooding. The community leaders first put our group to work going door-to-door surveying the needs of the community. The information we collected allowed them to prioritize medical and evacuation needs.

The next day we got up early again and returned to help, first hauling donations in the morning, then cutting out ruined drywall and soggy insulation in the afternoon. At the last house, the worst of all, Rachel, one of our students from Taiwan, took a special interest in the 70-year-old owner, who then opened up to her about his personal tragedies.  We found out that we had already met him and ministered to his stressed-out wife the day before! As our time at his house came to a close, I gave him two beautiful Cambodian Christian books, and he hugged them tight to his chest as we prayed together.

This last one was the miracle we‘d been praying for most. A property, a team, finances, and students are necessary, but what we really want is unreached people transformed by the love of Jesus.

Please pray for more of those miracles. 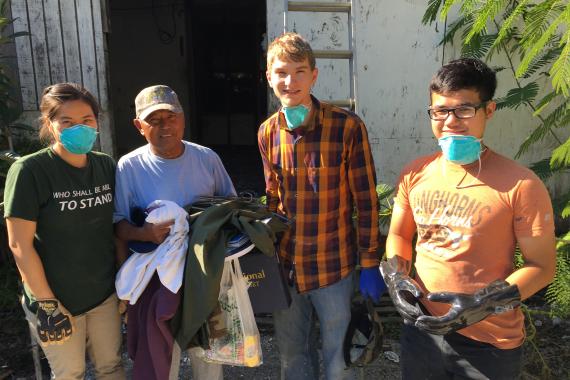