My wife Julie asked the circle of Cambodian mothers, “If you had an extra $50, what would you do with it?” Immediately a lady answered, “I would put my girl in school.” She knew the huge value of education to help her daughter have a better future.

Even though government education is free, this mother could not spare the money for school supplies or the tutoring the teacher would require before her daughter could pass the tests. She could not afford to spare a big sister who could watch the smaller children at home while she worked in the market.

That girl, who had to watch other children go off to school in their blue and white uniforms, is why ASAP Ministries is involved in education. Yearly, we send $167,000 to support over 40 schools or literacy centers, impacting 2,323 students and their families.

One of our schools started because a national missionary saw children scrounging through the garbage dump for recyclables to sell for supper. He couldn’t stand the thought of their hungry and desperate future. He started a little school with grade one and added another grade each year.

Another school began because a Vietnamese man was concerned for the children of illegal Vietnamese immigrants. These children were at risk for dangerous child labor, including prostitution. He began a school that has touched hundreds of children in the last ten years.

The education crisis is a worldwide tragedy. UNESCO reports 124 million children and adolescents that were not in school in 2013. That means 1 one out of every 11 children does not have the privilege of learning. Their futures are almost guaranteed to be a struggle in poverty.

How much of a difference does a Christian education make in the lives of the children? It’s life-transforming!

The work of education is definitely part of the mandate God has given us. If we will get involved, we can, like Jesus have a mission to “proclaim liberty to the captives and recovery of sight to the blind, to set at liberty those who are oppressed” (Luke 4:18).

Perhaps the least known of ASAP-sponsored schools is Karen Adventist Academy (KAA) on the border of Thailand and Myanmar. Principal Thien Tan Aye runs a K-12 school with over 1,000 students. The children study within the confines of a refugee camp that houses about 15,000 people. Most are from the Karen tribe, which has fought a civil war with the Burmese of Myanmar. The camp provides safety and a chance at a decent future through education.

Principal Thien has the motto of the school posted everywhere. It says, “Make God First!” He makes sure each teacher starts each class with prayer. They tie the Bible and God’s principles into every subject. The students don’t just sit around studying. They are active in community service projects. Often one of the classes will head out to pick up garbage throughout the camp. Recently they helped other denominations build a prayer room. They even donate blood together—15 different times as of the last count.

ASAP Ministries has committed to support all 32 of KAA’s teachers. At our sponsor page you can select to be responsible for one of them for $70 a month. Try it for a school year and think about how your influence has been multiplied through a whole classroom of students. You can also give directly towards schoolbooks and building repairs. How much of a difference does a Christian education make in the lives of the children? We will only really know once we get to heaven. Jesus said, “Let the little children come…the kingdom is made up of these.” It is very true that they are the most open to receiving God’s salvation. Last year, just after the week of prayer at KAA, eleven students were baptized and another five after graduation. Pastor Thien said, “This is not our good work, but this is the blessing by God and answers to prayer.”

Where church members cannot yet have a school, they are often holding literacy classes. Recently, a national missionary reported the excitement of a girl who had begged him to teach her how to read and write. He had simply taken the Bible, some lessons he received at an ASAP training, and a picture book of Jesus and the disciples. She soaked up every minute he taught her.

Soon she was running around the village telling people stories with the pictures. “What are you talking about?” someone scoffed. “You don’t know what’s in that book. You can’t even read or write!”

She simply opened the Bible and shared a story. Now other children are flocking around to get an education from her.

You can be a part of welcoming children to Jesus by praying for these workers, participating in their salaries, or finding a way to teach children yourself. Whether you go as a volunteer overseas or participate in a local Vacation Bible School, God can make an eternal difference through you. 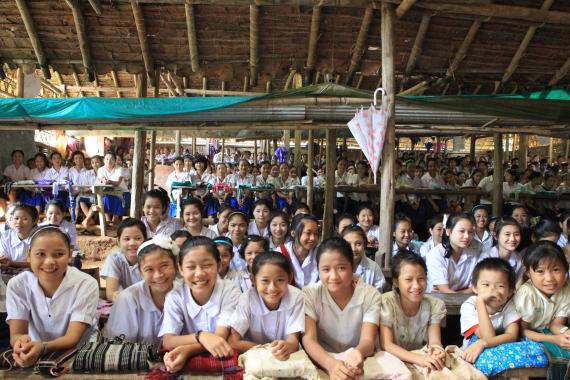