The woman looked up and down the road before laying down her bundle at the side. Then she quickly disappeared before someone could associate her with the abandoned burden. Soon a young girl appeared. As she walked along the rutted road under the hot Cambodian sun, she heard a pitiful sound like the cry of a baby, an abandoned baby. “What should I do?” she wondered as she pulled back the wrap. “I know. I’ll take him home with me!”

“Home” wasn’t much. Since her father had abandoned the family, life was hard. A place to live, food to eat. This was the focus of her mother’s life. Yet her mother did not hesitate to adopt the little boy in the dirty blanket, and the little girl suddenly became a big sister to baby Banh Van Thi.

Years passed and the baby became a toddler, then the toddler a happy four-year-old. One day a neighbor told Banh’s mother about the SDA Feed and Read School in their Vietnamese part of the city and how they taught children to read and write there. Poor as she was, a dream began to grow in Mother’s mind: my son must be educated. Maybe she knew that this was a Christian school and maybe she didn’t. No matter. She brought little Banh to the school and he began to learn. More important than reading and writing, he began to learn about Jesus. Wanting to be involved in her son’s life, Mother came to church with Banh on Sabbaths and little by little she began to learn, too. In 2009 Mother was baptized. Three years later Banh was old enough to take that step himself. And a few years after his baptism, Big Sister made her decision as well.

Banh completed all nine grades offered at the school and began assisting the teachers with various tasks. The principal, recognizing his gifts, began to tutor Banh so that he could pass his exams in Vietnam. When Banh was only 17 years old he started teaching at the school that had brought so much wonderful knowledge into his life.

The following year Banh suffered a shock when his mother divulged the secret she had successfully kept from him throughout the years of his young life. She was not really the one who had brought him into the world. His sister wasn’t really related by blood. This upheaval in Banh’s life troubled him for some time until he realized how much his adoptive mother had done for him, how she had rescued him from death or worse. Her love and kindness had given him life and joy and purpose!

Today, Banh Van Thi is 20 years old. Last year he taught guitar to fifth and sixth graders at the Vietnamese Feed and Read School in Phnom Penh, Cambodia. Tall and winsomely humble, this young man knows what it means to be saved and he wants to pass on the gift of life to others abandoned alongside the road of brokenness and dysfunction. His dream is to go to college and become a teacher.

What Satan intended for evil, God rescued on the road of life. “For I know the plans I have for you, says the Lord, plans … to give you a future and a hope.” (Jeremiah 29:11) 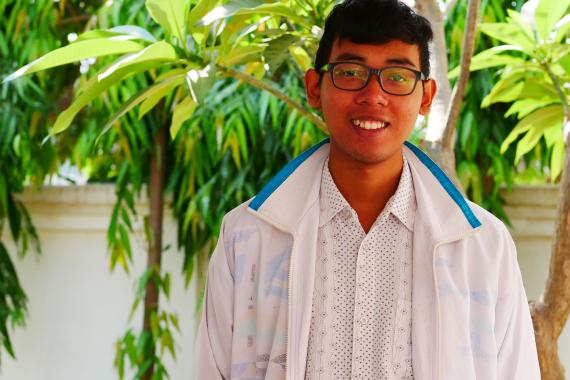