“We need a pastor. Will you help us?” Pastor Chanchai Kiatyanyong heard the question over and over as he visited Hmong Adventist groups around the U.S. following the 2015 General Conference Session. After four decades of service as a church planter, teacher, pastor, and administrator for Thailand Adventist Mission (TAM), he might have suggested that his petitioners find someone else. Instead Pr. Chanchai prayed about their request. In May 2018, God opened the way for him to return through ASAP as the Hmong ministries coordinator for the Seventh-day Adventist Church in North America.

Based in Milwaukee, Wisconsin, Pr. Chanchai quickly discovered that reaching the Hmong would not be easy. “There are so many Hmong people in Milwaukee, but they are so busy,” he laments. Many work twelve or fourteen hours per day to support their families, leaving little time for fellowship or Bible study. But God inspired Pr. Chanchai with a new strategy for multiplying disciples in the Hmong community. Shifting tactics, he began visiting the sick and elderly. “I will reach this group,” he decided. “Then, I will reach their children.”

Soon, Pr. Chanchai learned of a former church member who was gravely ill. They had met forty years earlier in a Thai refugee camp, where the man was a church elder, but he had left the church after immigrating to the United States. Pr. Chanchai drove 100 miles to Appleton to visit him. They spent hours talking, singing, reading the Bible, and praying. After their visit, Pr. Chanchai received a call from one of the man’s children. They had been planning their father’s funeral, but now he seemed to be recovering! Pr. Chanchai continued to visit and pray with the man. Though indifferent at first, his children eventually warmed to Pr. Chanchai. “They see that God is real because He is helping their father to get strong,” says Pr. Chanchai, who is currently conducting Bible studies in their home.

Two hours away in Green Bay, Pr. Chanchai leads another Bible study in a unique setting. Last summer, an Adventist farmer heard about his ministry and invited him to give Bible studies to the Hmong workers at his farm. So, once a week Pr. Chanchai travels to Green Bay. At 10:00 A.M., work on the farm stops and the workers gather under a large tree where they sing and study together for an hour. Pr. Chanchai also visits their homes, and during the winter months, he calls and prays with them. He hopes to plant a Hmong congregation in Green Bay soon.

The congregations Pr. Chanchai serves in Milwaukee and Madison are growing, too. Shortly after arriving in Wisconsin, he held an evangelistic series. Among the attendees were nine Hmong young people, mostly from other denominational backgrounds. Pr. Chanchai invited them to his home for Bible studies. For several months they met each Monday for five hours. First his wife taught the young people how to make Thai vegetarian meals. Then they ate and studied the Bible together. This February six of the young people were baptized, and a seventh plans to get baptized soon.

But perhaps the greatest joy of Pr. Chanchai’s first year of ministry in Wisconsin has unfolded in a retirement community in Sheboygan. Many years ago, while his parents were living in northern Laos, they adopted a young orphan girl. She got married and moved away before Pr. Chanchai was born. They had lost touch until Pr. Chanchai learned she was living in Sheboygan and battling cancer. He and his wife began visiting every week to pray with his sister, give her massages, and study the Bible with her. Soon her health began to improve, and her friends took notice. “Everyone was surprised that she recovered,” reports Pr. Chanchai. She told them it was because her brother came to pray and study with her. Now, several residents of the retirement community have joined the weekly Bible studies. “We were apart our whole lives,” says Pr. Chanchai, “Now, God has given us time to spend together and share our testimony!”

Please pray that God will continue using Pr. Chanchai as he reaches out to the Hmong in North America. There are other Hmong Adventist groups in California, North Carolina, and elsewhere who will also benefit from his compassionate, visionary spiritual leadership. 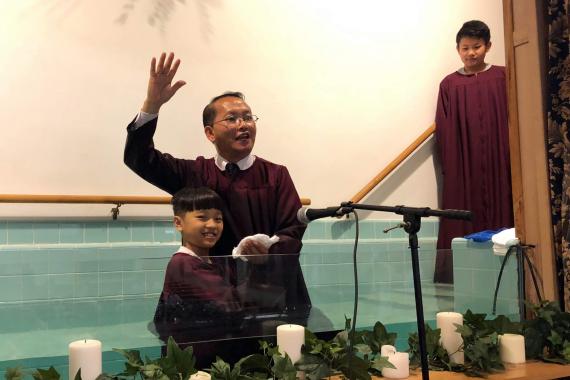