A New Husband for Leah

Leah Ma Saw,* an ASAP teacher in Myanmar, is married to a new husband. She didn’t expect that her life would turn out this way, but it’s a wonderful blessing. Her former husband—let’s call him Joe—was very difficult. Joe didn’t encourage her in her teaching. Joe drank. Joe used drugs—a lot. Joe wasn’t a good father to their children. His rage spilled over even the smallest of things and he wouldn’t let go. Leah could list many reasons for wanting a divorce, and apparently, Joe felt the same way. It seemed he just wanted to drink himself into oblivion and sleep. When he was awake, he tore up the house. Nights were filled with fights between them. Leah had been scared of him at first, but as the horror of their life together grew, her fright melted into deep disappointment and grief. She tried to be patient for the children’s sake, and she prayed. Oh, how she prayed!

Two years ago, Leah attended the annual ASAP worker training with a heavy heart. She and Joe were planning to divorce when she returned home. “We fight every time before trainings,” she explained to ASAP Executive Director Julia O’Carey. “He does not want me to attend. But I am so blessed by the trainings. I must come.” At the training, as Leah listened to a presentation on the Holy Spirit, she was convicted to forgive her husband and return to him in love. During the united prayer session that followed, she poured out her heart to God. “He gave me the gift of forgiveness for my husband,” she shared at the time. “I’m going to go back home and make things right with him.”

However, when Leah returned home, Joe had not changed. He angrily ripped up her notes from the training, and he continued drinking and sleeping the days away. But Leah continued praying. And one evening she and Joe were finally able to agree on one thing. It was time to consult the village chief to see if he could help them. It must have been an answer to prayer, Leah thought, because the chief told Joe that he shouldn’t treat his wife so badly. And from that day on, Joe started to change. During the next two months he stopped chewing betel nut. Smoking fell away next. And then alcohol. He started to fast and pray. He attended a Daniel and Revelation seminar at church. He started canvassing and selling church books. Leah couldn’t believe what she was witnessing! Many times Joe had tried, without success, to stop drinking and smoking. Always in the past Leah had led out in morning and evening worship, but suddenly Joe took up his priestly role and started leading out on his own initiative. Compassion filled his heart and he went from house to house helping people. He began to read the books he was selling, learned about hydrotherapy, and put his new knowledge to work. Leah and Joe began praying and worshiping together. Joe was a new man! Joe was a new husband!

If you ask Leah what made the difference, she won’t tell you that the village chief is a fabulous counselor or an authoritative leader who knows how to make things happen. She will tell you that consistent prayer to the greatest Counselor who ever lived, prayer to the Leader of the universe, is what brought about such a miraculous change. “I was like Saul,” says Joe, “because he, too, persecuted believers and God’s children.” But now, Leah has a new testimony to share, even among believers in other denominations. Her Saul has become a Paul; her old husband has been born again! 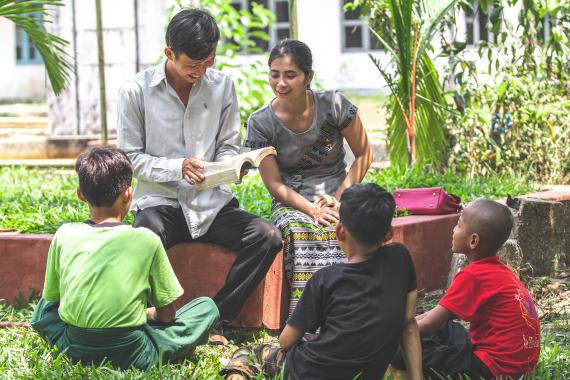