There are giants among us: Strong, God-fearing men and women who take a stand that is larger-than-life. You may know someone like that. I do, too. His name is Saw Htoo.

Saw Htoo left his relatives and friends in Utica to move his family to the intimidating inner-city of Albany, NY to work as a volunteer pastor, and receive no income other than assistance for rent. He and his wife made this decision after earnestly praying and being impressed that it was God’s will. Albany, New York is not only home to NY’s football team, the Giants, it’s also home to thousands of refugees from Burma and now, a giant-of-a-leader, Saw Htoo.

The first Sabbath in Albany, he gathered the four baptized Seventh-day Adventist Karen together in his home with his family. The eight of them discussed reaching out to others. The next Sabbath a few more attended. Soon his home was full and people were asking for baptism. Today, just over three years later, that little group of eight has grown to 35 baptized members with weekly Sabbath attendance averaging between 120-200 people and meeting in a church. Those between the ages of 15-22 make up the largest group of attendees who are also active participants in the service. Many are studying for baptism this summer, 2013.

One factor key to the evident success was that he immediately began performing tasks that were outside his comfort zone, but imperative to connecting with the refugee community. He found himself accompanying refugees to all kinds of appointments: medical, school, court, dental, USCRI office visits, to help translate and guide them through the confusing system in this new country. If you happened to visit him, you would see him praying with people, distributing clothes to new arrivals, translating important letters, conducting Bible studies, patiently listening as a couple shares their marital problems, gently helping the grandma who’s in culture shock and longs for her home country, organizing soccer tournaments for the refugee youth to keep them off the streets, ordering more Bibles in the Karen language, encouraging the Karen child who is bullied at school, etc. From early morning until late at night, his home is Grand Central Station. He has responded to car accidents, five house fires, a heart-breaking rape case, several theft cases, countless domestic violence situations, eviction notices, flooding incidents and hate crimes targeting the Karen.

I call this soft-spoken, humble pastor a giant-of-a-man for many reasons. First and foremost is his staunch belief that he worships a giant-of-a-God. Pastor Saw Htoo preaches with conviction about a God whose power through the Holy Spirit can be called upon for every issue, every problem faced in life, regardless of the scope or magnitude. Pastor, chief, respected teacher, big brother (all respectful terms he is referred to as in this community) . . . all point to a person who works tirelessly for the Lord. It is an honor for ASAP to work with Pastor Saw Htoo. While Pastor Saw Htoo isn’t rumbling over dirt roads on his moped from village-to-village with the gospel in a country in Southeast Asia, his purpose is the same and deserving of our prayers and support. He is dodging inner-city traffic, going house-to-house with the gospel. As a pastor in Asia, he responded to war and disaster. As a pastor in America, he responds to a different kind of war and disasters of a different nature, but alike in their attack on the soul. You can join Pastor Saw Htoo by helping to provide the rent needed to meet each Sabbath in a church. Your interest and prayers are gifts worth much more than any monetary value.

If you feel impressed to write Pastor Saw Htoo an encouraging note, please do. His home address is: 192 Delaware Ave. Albany, NY  12209. Thank you for lifting this NY giant up to the Lord in prayer. 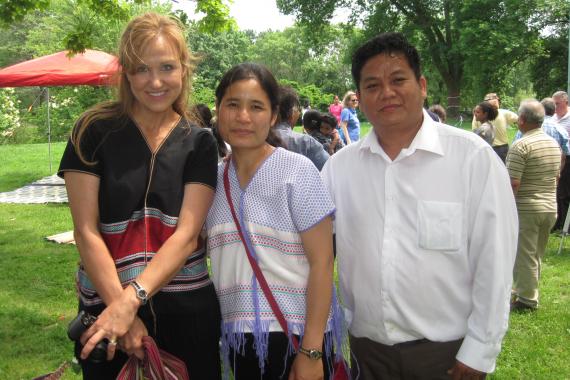