The Path of Life

What could it mean? Sher Htet Naing Min awoke pondering his strange dream from the previous night. Who were the three holy people in white robes? He had not seen their faces, but somehow the young man knew that this was no ordinary dream. Finally, he decided that the three people dressed in white must be those who would help him navigate the “Noble Eightfold Path,” believed by Buddhists to lead to spiritual enlightenment and the end of suffering. However, Sher Htet Naing Min was about to encounter a new and unexpected path.

Growing up in Myanmar, Sher Htet Naing Min had attended an Adventist school in his village, but only in order to learn English. As a lifelong Buddhist, he had never considered leaving the religion of his family and his culture to convert to Christianity. However, this changed during his high school years when he came across sermons by a well-known Burmese evangelical pastor on YouTube. By the time he started studying business at Myanmar Union Adventist Seminary (MUAS) in Myaungmya, a great spiritual battle was raging in Sher Htet Naing Min’s heart.

ASAP field supervisor Dr. Htwe Lay Thein immediately recognized the young man as a seeker of truth and offered him Bible studies. Sher Htet Naing Min accepted. They studied together for more than a year, but although he believed the teachings of Scripture, he remained hesitant to abandon the teachings of Buddhism. He wanted to be both Adventist and Buddhist.

About this time, Pr. Puia Fanai (a current ASAP volunteer) arrived on campus to hold week of prayer meetings at MUAS. Though Pr. Puia’s family immigrated from Myanmar to the United States when he was young, he had long dreamed of returning to minister to the Mizo people. Finally, while completing a Master of Divinity at the Seventh-day Adventist Theological Seminary at Andrews University, the opportunity arose for him to accomplish his field evangelism practicum in Myanmar.

On the opening night of the week of prayer, the Holy Spirit impressed Pr. Puia to share a sermon about why he believes in the existence of God. It was exactly the message that Sher Htet Naing Min needed to hear. Suddenly, his reluctance to fully commit his life to Christ disappeared. He sought out Dr. Htwe Lay and told her he was ready to get baptized. Later that week, when Pr. Puia gave an altar call, Sher Htet Naing Min and another young Buddhist man came forward to request baptism. 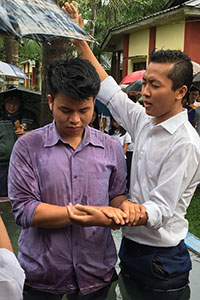 The Ayeyarwady Mission granted Pr. Puia permission to conduct the baptisms at the end of the week, but as the day approached, questions crept into Sher Htet Naing Min’s mind. Why now? After this long struggle, why does the decision to follow Christ suddenly seem so easy? That’s when he remembered his dream. Now, he realized that God had sent him that dream. And He had also sent the three people from the dream – the pastor on YouTube, Dr. Htwe Lay, and Pr. Puia – to lead Sher Htet Naing Min along a far different path than he had anticipated, one that led to true spiritual enlightenment through the Holy Spirit and the Word of God.

Sher Htet Naing Min currently serves as a volunteer fifth- and eighth-grade teacher at the Southeast Adventist Seminary in Myanmar’s Kayin State. His testimony reminds us that God still works in miraculous ways to reveal Himself to earnest seekers of truth in every culture and religion of the world today.

“You will show me the path of life; in Your presence is fullness of joy; at Your right hand are pleasures forevermore” (Psalm 16:11, NKJV). 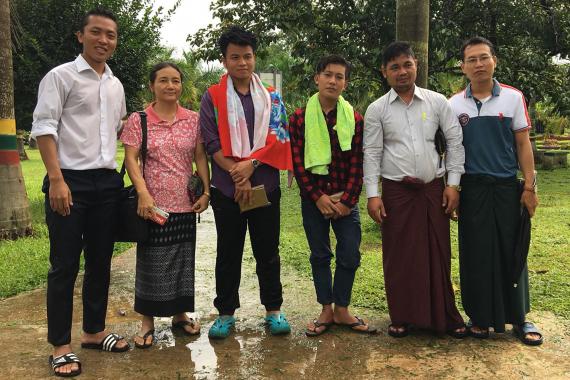