It was Thursday morning at Wisconsin campmeeting and I had been telling mission stories every morning at the Primary tent. I started telling my very favorite, a miracle story that involves secret DVDs in a closed country in Asia. I told them how a church member was impressed to bring a secret DVD to the marketplace and then I asked, “How many of you have ever had a quarter?” Every hand shot up around the tent! Then I told them, “Do you know, you can make an eternal difference with just one quarter. That is what it costs to print a secret sermon DVD for this closed country!”

At that moment Maddy, her blue eyes shining, shot both hands up into the air. She was clutching a quarter in each hand. “I have two quarters right now. I want to give them for secret DVDs!” I hadn’t been expecting an immediate response, but I took those two quarters, put them in my pocket, and continued the story. I was touched by Maddy’s unprompted gift, but little did I know that with those two quarters she had started a movement of mission giving.

That afternoon a boy came rushing across the grass towards me, “Pastor Lisa! Pastor Lisa! I have a quarter for secret DVDs, too!” Later two curly-haired brothers, Moriah and Micah, found me and exclaimed, “We have quarters for DVDs!” But that was only the start of their giving. Their grandmother later told me how excited and busy they were looking for ways to earn more quarters at campmeeting!

Friday morning before I started my story, I reached into my pocket and brought out the growing collection of jangling coins. “Look at how many secret DVDs we can buy now!” Later that morning two more girls found me and gave. Then a brother with two little sisters eager to get in on the giving. The kids kept coming.

By Sabbath morning when I stood up to talk, I had quite a pocketful of money. But then it happened. Before I’d even begun to speak, children from all over the tent spontaneously stood and began to walk towards me. About two dozen smiling children came, pressing quarter after quarter, and even some bills into my hands. I left with a heart full of joy in these mission-minded children and now two pockets full of money. By that evening I had $50.50, enough to purchase 202 DVDs. Before I left, one little girl, her brown eyes sparkling, promised, “I’m going to save money this year for secret DVDs. I’m going to save until my bank is stuffed to the top!” 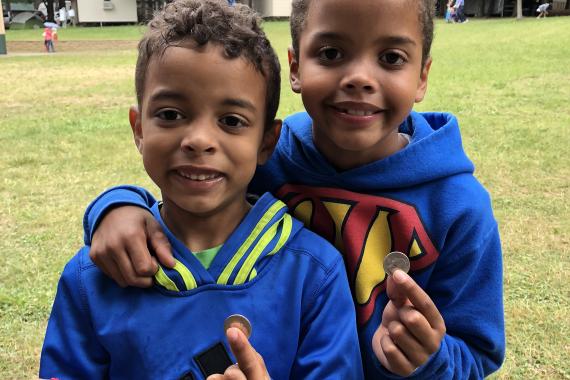