The Task that Remains

Jesus had such a commitment to the vulnerable lost that He said the shepherd should leave the 99 in an open field and head out to rescue just one that was about to die. Is that the pulsating priority of your heart? Does the giving and serving of your church reflect it?

Sadly, the majority of missionaries and offerings do not go to the most vulnerable and least-reached peoples of the world. We basically give our money and time to the 99 in the huddle.

Yet we wait for Jesus’ return precisely because there are still over 3 billion people in 4,051 unique people groups that do not have an effective, multiplying Christian witness (Matthew 24:14).

Is ASAP Ministries taking this end-time commission seriously? ASAP’s acronym stands for Advocates for Southeast Asians and the Persecuted. Are they among the least reached? Explore, pray, and recommit to finishing Jesus’ assignment with us.

Cambodia is unreached.* It has close to 16 million people with 30 unreached people groups. There were very few Christians and only a handful of Seventh-day Adventist members in Cambodia before the horrific genocide of the 1970s. In the refugee camps thousands came to Christ. Judy Aitken, the founder of ASAP Ministries, was actively involved as a nurse and encouraged evangelism in the refugee camps. Scott and Julie Griswold joined the church planting mission and along with other workers saw members added and churches planted in every province of the country.

An ASAP-sponsored church planter named Saum Sovannak has extended God’s work into the Cham people group who are predominantly Muslim. We continue to partner with the Cambodia Adventist Mission to start new work where the lost sheep wander, sponsoring a total of 84 workers.

Laos is unreached. It has the second-lowest percentage of Seventh-day Adventists in the entire Southern-Asia Pacific Division. For a small country of just over 7 million, there are a huge number of unreached people groups—114! The mission leadership and our ASAP-sponsored church planters are determinedly witnessing among the majority Buddhist Lao people group while pushing into new groups like the Tai Dam, Ngae, Ta Oi, Nyagon, Yahern, and others. There are now about 100 members in the Ta Oi tribe. Remember these are animist tribes who worship spirits without a knowledge of the Creator God and the love of Jesus at the cross.

Myanmar is unreached. You would think with more than 28,000 Seventh-day Adventists that we would not call this country unreached. Most of the Seventh-day Adventist members are of the Chin and Karen tribes. The majority ethnic group of 30 million Burmese has very few Seventh-day Adventists. The country itself has about 50 unreached people groups still waiting for a vibrant gospel mission. For the last several years, ASAP has channeled funds into medical missionaries and church planters who have specifically focused on the huge unreached population of the Shan and Rakhine tribes.

Vietnam is unreached. In the statistics you will find Vietnam listed as much more reached because of the large numbers of Catholics and the dynamically-growing Protestant groups. However, the Joshua Project still reports 69 out of the 118 people groups in the country as unreached including over 8 million people. These are Buddhists and animists almost entirely untouched by the truths we hold dear.

ASAP Ministries supports the Peace and Happiness ministry that has impacted thousands of Vietnamese, as well as numerous ethnic groups. Some of these tribes already had Christians among them like the Hmong and Mnong, the Ede and Hre. We have entered other entirely unreached animist ethnic tribes such as the Giao, Tai, and Muong. Even some from the Muslim Chams have been reached.

At a secret training about a year ago, we watched as 24 Vietnamese church planters came forward to kneel in dedication, determined to take the three angels’ messages two-by-two into 12 provinces that as yet did not have Seventh-day Adventist work among them. We are praising the Lord for a report from Pastor Isah that shows at least 21 new house churches and more than 452 people worshipping in those new areas.

Thailand is unreached. This beautiful country has been home to thousands of missionaries for many years, yet less than half a percent of the 68 million people have become evangelical Christians. Eighty-two unreached groups wait for our service and message. Besides the millions of Buddhists, two and a half million Thai Muslims have no Seventh-day Adventist work among them.

At our recent training of the 12 Thai church planters that ASAP sponsors, we urged them to press past their present worship groups to establish new work in new villages. We more than urged them. Together with the mission leaders we told them that now since their groups have been established long enough, if they wished to remain hired as church planters, they must begin new work. They were excited. Some had already begun.

Why are we pushing like this? Because we know the desperate need of those who do not know Jesus Christ. I have seen the tears pour down the face of a man who had trafficked children as he realized that Jesus had died to set him free from hell. I have seen the incredible excitement of a Buddhist taxi driver as he was introduced to his father, the Creator God. We must all take up Jesus’ call to reach every kindred, tribe, and tongue.

Pray, give, and go. It’s time to finish the work.

*The Joshua Project counts a people group as unreached if it has 5% or less professing Christians and 2% or less evangelical Christians. Learn more about the unreached overseas and near you. 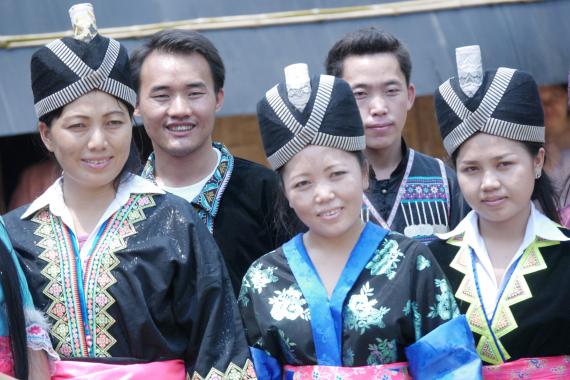