Salvation in the Concrete Jungles

Chanla (James) Dok met God in the refugee camps after fleeing the genocide in Cambodia (Read his book Salvation in the Killing Fields). He repatriated to the concrete jungles of California and helped start a Khmer (Cambodian) worship group at the Seventh-day Adventist church in Long Beach. They met in the youth room of the English-speaking church. Chanla wanted to be a policeman, but he heard God calling him to gospel ministry. He applied to La Sierra University and the door opened the day before he received his acceptance letter to the police academy.

Chanla raised up a solid group of Khmer believers. Then he moved to be an associate pastor at Norwalk and later pastored other English-speaking churches. He could not forget his own people. The amount of Khmers had grown to around 70,000 in Long Beach alone. Chanla felt they were like sheep without a shepherd. With the help of his district leader and the conference president, he put together a proposal for a center of influence that would be focused on Khmers.

The Southern California Conference recognized the great need and opportunity among this immigrant group. In 2015 they voted in partnership with the Pacific Union to open the Sua Sdei (Welcome) Center. They provide Khmer and English classes, as well as paralegal advice. You can learn more about the ministry at www.suasdeicenter.com.

Recently, ASAP’s founder Judy Aitken visited Pastor Chanla Dok, his wife Vandie, and the Sua Sdei Center. She was thrilled to see many people visiting. Chanla had posted her picture on the program advertisement, hoping that some in the community would remember her from the humanitarian work she did in the refugee camps during the 1980s. A Khmer gentleman named Tom Ly saw the picture. He came to the program and excitedly pressed forward to greet the one who had touched his life with Jesus’ love 35 years previously.

After the program, various individuals and Cambodian members from another worship group met together to earnestly pray for God to bring many more to the center. Some members offered to help run a health fair. They also committed funds to build a church back in Cambodia through ASAP Ministries.

It was a reminder to everyone of the great amount of work yet to be done. Many Khmers live abroad in Vietnam, the U.S.A., France, Thailand, Australia, and Canada. As far as we know, there are Khmer Seventh-day Adventist worship groups only in Toronto, Canada; Adelaide and Perth, Australia; Lowell, Massachusetts, Charlotte and Lexington, North Carolina; and Long Beach, Stockton, and Loma Linda, California. There is a particular need for outreach in Boston, Seattle, and Philadelphia.

Perhaps you will meet someone from Cambodia like I did on a recent flight. I was thankful for the opportunity to share my faith. The Khmer lady was a high ranking bank official who had, as a student, visited Christian churches. Her interest in a relationship with God was renewed by our visit. I was able to hand her the MyLanguageMyLife.com card and I’m sure she will be watching some of the videos or reading the lessons in her own language. You can do the same. We can reach the world next door. 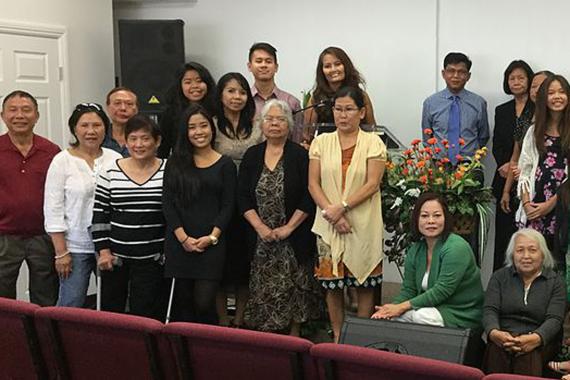