BY CAROL REYNOLDS, ASAP BOARD MEMBER

ASAP is intentional about training young people from refugee backgrounds to minister to their own people. Kyaw Soe Soe, known as “Soe” to his friends, graduated from Ouachita Hills College this month with a theology degree. He is especially grateful to have received help from ASAP’s Judy Aitken Memorial Refugee Scholarship Fund while studying to become a pastor to the Karen diaspora who have relocated to North America from Myanmar.

Soe’s family were brought to Dallas, Texas, in 2008 from a primitive refugee camp on the border of Thailand where Soe spent the first ten years of his life. His Christian parents were teachers who had fled civil war and persecution. Transition to life in America was difficult as they struggled to learn a new language and adapt to a totally different way of life. Soe attended grades 6-12 in public schools where he was often bullied, and the large number of other immigrants made mastering English difficult. But he persevered and after graduation he attended community college with the goal of becoming a nurse and earning a lot of money.

However, God worked on his heart, and Soe decided that he really wanted to work for God. The leader of his Karen church in Dallas gave him a brochure about ASAP’s training program, Reach the World Next Door (RWND) in Houston.  He attended this program, led by Pastor Scott Griswold, for a year. That was when his life really changed, and a strong desire to become a pastor grew in his heart. During his time there Soe gained his own experience with God, learned English much better, and was blessed to do outreach to immigrants from Buddhist, Muslim, Hindu, and secular backgrounds. RWND prepared Soe to continue his education.

Soe was interested in continuing school but lacked finances. He prayed hard. Then he learned that another Karen student was attending Ouachita Hills College (OHC), a small Bible college in Arkansas. He was accepted and provided an opportunity to earn money by canvassing and working at the school. This, along with ASAP’s matching scholarship, helped him pay his tuition. Each year Soe prayed about his financial needs, and God miraculously provided. Selling Christian books door to door greatly increased his confidence and language skills and allowed him the opportunity to experience how real God is.

The opportunity to study theology for the past four years at OHC has taken Soe to another level in his walk with God. He knows that God has led him step by step, and he is eager to begin his life work as a pastor. Soe plays the guitar, sings, and loves the Word of God, especially Job, Psalms and Proverbs because they’re full of praise to God. For a class requirement Soe and a friend preached an evangelistic series in Karen that was recorded and was viewed by hundreds in various countries where the Karen refugees are resettled. He also returns to his home church in Texas frequently where he preaches, works with the youth, visits, and plans to minister once he graduates. Eventually Soe would love to spend time back in his homeland if God opens the way. He says, “I praise God for ASAP’s donors who helped me with my education that has prepared me to serve the Lord as a pastor to my people that are scattered around the world.” 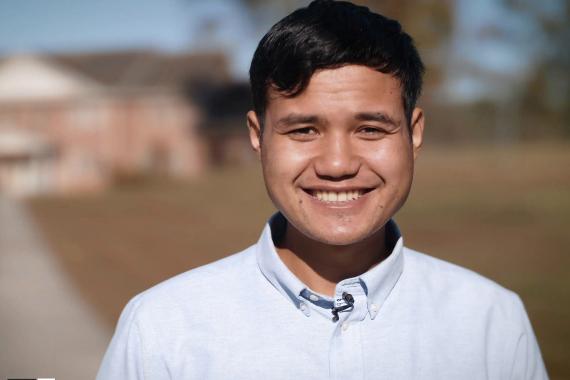