The Fruits of Revival in India

Chawngthu is the pastor of the Mizo church plant in Indianapolis, Indiana that has burst into existence in the last few years. We’ve told his story in the Leave Your Sushi and Go! podcast. Part of his ministry is to return periodically to Myanmar and India to hold revival meetings among the Seventh-day Adventist Mizo church members.

Recently, a group of Pastor Chawngthu’s friends from India visited ASAP Ministries. Three of them were principals of schools they had started privately to help the children of Northeast India. They had formed a ministry called Paul’s Missionary Band. Chawngthu had joined them for a three-day revival meeting.

Each principal stood to share with the ASAP staff. “We didn’t know we were just nominal Seventh-day Adventists,” one said. “He taught us to shed tears,” another added, emphasizing how the love of Jesus and a straight message of true Christianity in light of Christ’s soon coming had opened their eyes. The third said, “I used to watch TV a lot and I couldn’t eat anything unless it had meat in it. Now I don’t want to watch TV any more. I’m even eating as a vegetarian. There’s nothing so enjoyable as having God’s Spirit in us.”

The preaching of the word of God had led to conviction of sin and changed lives. That led to evangelism and beautiful humanitarian work among drug addicts and the sick. The district has gone from 30 members to 500 members!

That’s why ASAP recently invited you to partner with us to raise funds for the Hunthar church building in Mizoram, India. We had the privilege of placing $6,000 in the hands of the Head Deacon of the Hunthar SDA Church, who is also the director of the Sub-Headquarters of the Final Messengers. The Final Messengers established their headquarters here in America and their vision is to reach the Mizo people and prepare for the later rain in other American cities like Des Moines, Iowa, countries like Canada and Australia, and the many other unreached people in India, Myanmar, and beyond.

A revival of true godliness is our first work, for its fruits will follow.

To hear more of the Mizo church’s story, visit our podcast archives at asapministries.org and watch “Leave Your Sushi and Go!” Call us at (269) 471-3026 to order MyLanguageMyLife.com cards. 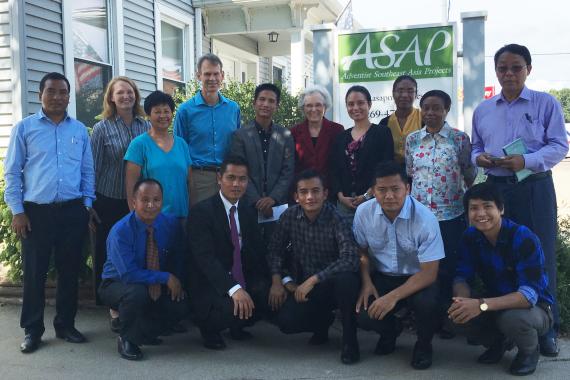