It was evening when 19-year-old Yusef* met his friend at the Eritrean border and said goodbye to his home forever. He did not risk telling his family that he was leaving. He knew that they would try to make him stay, for this was not a safe journey. Even with their knowledge of the border, it took Yusef and his friend three days to cross into Ethiopia where he was finally safe from his persecutors. With no money, no food, and nowhere to live, Yusef entered a refugee camp. Unfortunately, stories like Yusef’s are not uncommon. There are currently over 900,000 Eritrean refugees and asylum-seekers living in Ethiopia. These brave individuals have fled their homeland to escape forced military inscription, persecution, and torture.

Recently, ASAP Ministries partnered with a trauma team from the Andrews University School of Social Work to bring the message of God’s healing power to a refugee camp in Shire, Ethiopia. Through the passionate and persistent ministry of Dr. Bemnet Meried, the team arrived in Shire on August 11, 2019, with the intention to teach refugees about trauma’s effect on the brain and share tools to lower stress and live healthier lifestyles. The team consisted of ASAP director, Julia O’Carey, two Andrews University faculty members, Ingrid Slikkers and Alina Baltazar, two recent Master of Social Work (MSW) graduates, A.J. O’Carey and Jasmin Wilson, and a current dual-degree MDiv and MSW student, Katelyn Campbell.

Their time in the refugee camp was not without its low points. First, they spent several hours under the hot Ethiopian sun awaiting permission to enter the camp. Then, the entire team, including their local counterparts, fell sick after exposure to foodborne bacteria. With all things seemingly going wrong, it would have been easy to yield to frustration and discouragement. However, with prayer and faith, God left the group in awe at the display of His power and His plan.

After a paperwork issue left the team unable to enter the refugee camp, the Lord blessed them with an idea. Vans were sent into the camp to bring willing participants to a hotel within the city. If the training couldn’t be brought to the people, the people would be brought to the training! The Lord blessed this training with over 100 participants. Local team members estimated that this was more than the number of individuals that would have participated had the training been held inside the camp. After experiencing such a rich blessing, it was abundantly clear that though we may have our own thoughts and agendas, God’s plan will always reign supreme! 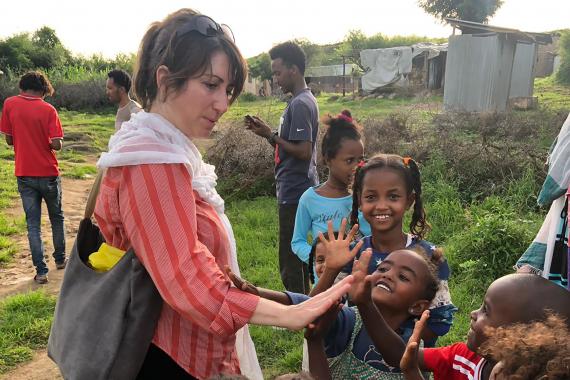