Let me introduce you to a very sweet Thai grandma who is also a loving church planter for Jesus. Grandma Kongsri has been Jesus’ friend for a long time. She raised her children to know God. Now she’s raising her granddaughter Ruth too. That keeps Grandma very busy because Ruth is only eight years old and Grandma has three church groups to take care of and seven Bible studies to give every week.

One morning Grandma Kongsri woke thinking she needed to hurry and get ready so she could drive Ruth to school on her motorcycle and go visit the new church members. But then she remembered her dream. In the night she had heard a voice saying, “I want you to go to Noy Noy Village to share my love. I have someone waiting there for you.”

Kongsri shook her head, “No. I won’t be going there. That’s a bad village. A very, very bad village. I have church members and new interests that need me. I know where I must visit.”

After she dropped Ruth off at school she realized she had forgotten her bag with her Bible. On the way back the thought came again, “I want you to go to Noy Noy Village. I have someone waiting.”

Grandma tried to push the thought out of her mind again. Everybody in that village is a castaway. Prostitutes and druggies, all of them. I don’t want to go there. She drove the motorcycle faster. “I had better hurry,” she thought. “I’m almost late for my appointment.”

Back at the house she tried to push her key into the heavy lock. It wouldn’t go in. “I’ve never had this problem before,” she muttered and tried harder. It wouldn’t budge. She started to get angry. “I’m going to break this lock or kick the door down.” Gentle Grandma Kongsri was unusually upset.

Suddenly she felt a rebuke. “Am I being a Jonah? Am I trying to run away from God? Am I mad at the lock like he was mad at the worm?” She stopped struggling and surrendered. “Lord, make me willing to go.”

She decided to try the lock once more. The key slipped in easily as always. Grabbing her Bible she raced down the street on her motorcycle headed not to the member’s house but straight towards Noy Noy Village. “But what will I say when I get there?” she asked God. Nothing came to her mind.

When she pulled into the town, her eyes opened wide. There was a school friend she had not seen since her childhood. Excitedly they began to talk, sitting underneath her friend’s house.

“Ah yes,” said the friend. “I remember how you Kongsri used to steal fruit from the neighbor’s trees. You weren’t content to share them with your friends. You even sold your stolen goods to us.”

They laughed, then Grandma began to tell her how she had met Jesus and how His love had changed her heart. As Kongsri shared her testimony, four of those “bad” village girls pressed in to listen. Kongsri smiled and told them stories of God’s love. It was the beginning of a new ministry in a new town, because Grandma “Jonah” stopped running from God’s voice.

Have you heard Jesus asking you to do something lately? He’s often speaking to us, encouraging us to help someone, to deny ourselves so others can have something special. Have you listened and followed?

God can use little ones too. How do I know? Because one night little Ruth saw Grandma wincing as she picked up something heavy. “Grandma, what’s wrong with your wrist? It’s pokey and bumpy?”

“I need to have surgery,” Grandma answered. “But it’s expensive and I’m scared.”

“I’ll pray for you,” offered little Ruth. “Jesus can do anything.” She rubbed that soft, wrinkled wrist while she prayed. The next day Grandma Kongsri lifted the heavy pail again expecting the sharp pain. She felt nothing. Looking down she was startled to see her wrist was as smooth as the other hand. There was no doubt that God loved her—and all the people in Noy Noy Village. 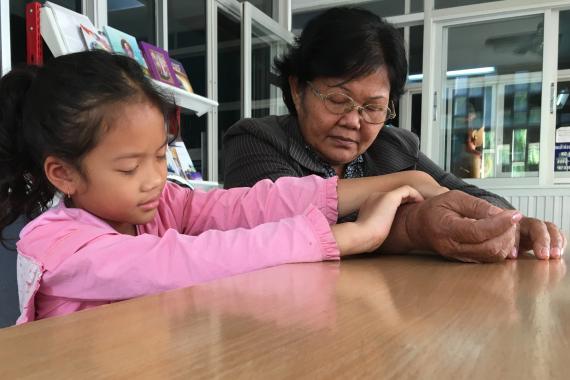