“Where is the Pun Chuan family today?” Church planter Nuth Mao wondered as he scanned the members sitting expectantly in his small church one Sabbath morning. “They have been so faithful in attending, something must be seriously wrong” he anxiously thought.

After the service Nuth Mao went to search for the family. He found all eight of them huddled in their small make-shift hut on the curb of the road. Mr. Chuan poured out his burden. “The day before, the government came and ordered us to leave because we built on public land. They want to clean up the streets. We have nowhere to go!” he said desperately. This problem was bigger than Nuth Mao could solve. He prayed with the family and asked the small groups in his church to pray for this need every morning and evening at 7 o’clock.

One day, two days, three days went by and there was no answer. Finally, on the seventh day, Mr. Chuan came into church with a radiant smile on his face. He said, “I trusted in God and He gave me some land.” Actually, God impressed one of the church members to donate a piece of land 35 x 40 meters for the family to build a house on. The joy and amazement oozed out of Mr. Chuan’s words as he described the beautiful gift of land that even had fruit trees growing on it! God answered many prayers through the loving sacrifice made by a fellow believer! Would you like to play a part in answered prayer and experience joy? Why not make a sacrifice for a brother or sister in Southeast Asia or a needy person you meet today! 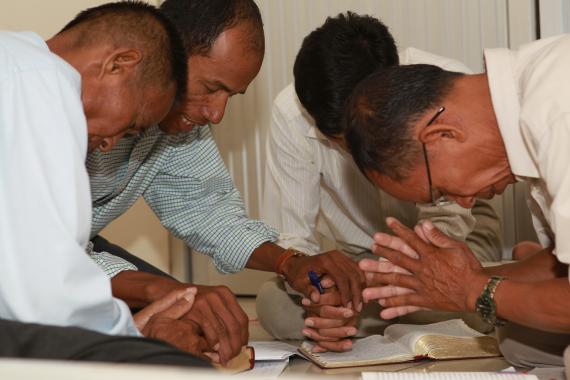