In a closed country, more than 1,100 groups of believers are worshipping God each Sabbath! Last year over 500 people were baptized. And these believers are active and alert for every opportunity to share their faith: on holidays when the government isn’t so harsh, through a growing cell phone ministry conducted especially by young people, at weddings and funerals and wherever people are gathered together. Let me tell you the story of one young woman making a powerful impact by God’s grace.

Suong Nguyen*, a very diligent worker, is quiet by nature and very observant. Working in a province violently opposed to Christianity, the Lord used her to raise up a body of thirteen believers, all of whom love to witness. As her members hand out materials to Sunday keepers, she watches for signs of interest and often quickly begins talking about Revelation 12–14, from which chapters she leads her listeners to Sabbath keeping and other SDA beliefs. She loves going door to door and sharing DVDs even though this activity is illegal. Because of the Holy Spirit, she finds success.

Suong was raised in a family with a mother who was a believer and then led her husband, a brilliant but uneducated man, to Christ. He was a respected communist to whom local authorities often came for advice. But the villagers knew of his conversion and pressured the authorities to stop his work. In the meantime, Suong discovered a Bible in her bed one night and began reading out of curiosity. That night she, too, became a believer, and when a Seventh-day Adventist taught the family about the Sabbath, they all finally came under conviction.

Life was challenging for them because the authorities, who really liked Suong’s father, were reluctant to give him up to Christianity. Eventually he passed away, and then family pressures influenced the mother and her daughters to build an ancestral altar in her father’s honor to please the uncles. But Suong was not at ease with the arrangement and at last the little family of women rose up and burned the altar and everything associated with it. When the uncles came to visit, they were enraged and continued to pressure them to rebuild the altar. Within six months, both uncles died and so did the police chief’s assistant who gave them so much trouble. From then on, the persecution slowed down.

Tiny Suong amazes people with her boldness and knowledge. She knows the prophecies and can explain what the Sunday pastors avoid talking about. A few months ago a shaman practicing witchcraft came to her village to sell herbal medicine. There he met Suong and became interested in what she had to say. He has started Bible studies and remains receptive. Even when admitted to the hospital, he has continued the studies. A strong spiritual battle is waging and sometime he feels as if his head will explode, but Suong’s prayers have overcome these terrible headaches and spiritual struggles.

After more deaths occurred among those who have opposed Suong and her work, the villagers now warn each other: “Don’t touch Suong’s family!” May God continue His great work through this little woman. Pray that God will help ASAP workers in closed countries to continue spreading the Gospel no matter what the opposition. Pray also that the Holy Spirit will make you bold and willing to share your faith no matter what your age or size. 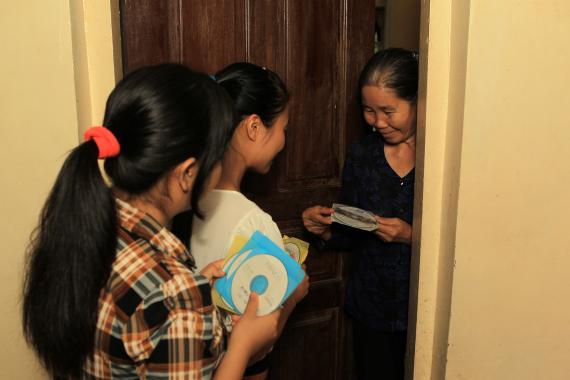